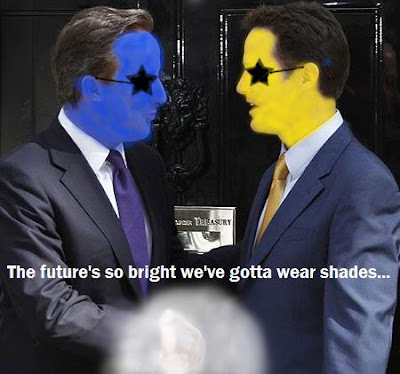 As the two newlywed parties flounce across No. 10 Downing Street’s threshold hand in hand and starry-eyed, their individual voters are baffled, to say the very least. For countless years before this love-fest, the Conservatives and Lib Dem’s had fought a long and drawn-out battle for voters’ hearts and minds, with each political faction bending over backwards to convince people they were so different to the others available. Then, politicians who were sworn enemies for years are suddenly sharing a Government cabinet together and making policies for their now disillusioned voters to follow, who are confused to what this merging should be referred to; not the two parties’ names, you understand, as that’s easy:

No, the biggest question on everyone’s lips at the minute concerns the latest Prime Minister David Cameron and the newly-appointed Deputy Prime Minister Nick Clegg: how will this fresh amalgamation be addressed?

Here I have three of my personally made-up favourites:

Anyway, I digress from my intended point, which is as follows: I’m quite excited with the future prospects this combination could bring to our anaemic, shattered country and let us not forget that there’s no harm in trying to get us all back on an even keel after 13 years of New Labour mismanagement. Historically, when blue is mixed with yellow, the blend creates the colour green but now, in the post-Election melee of our once Great Britain - stained indelibly by a faded and peeling red - we need the resulting political recipe to shine with a brilliant white; a pure and sterile foundation to begin our toxic society’s rebuild upon. We all know it’s not going to be an easy ride for some of Her Majesty’s minions, who are either employed in meaningless State job positions or are meaninglessly lounging around on benefits of some description and will no doubt be targeted as excessive flotsam to be swept aside in the coming harsh financial restructure. To be deemed potential collateral by the new Chancellor must be a worry for the vast majority of working people, so fingers crossed this experiment works and we can all look back without anger on these tentative years of cuts and restructure because basically, we’ve no other choice in the matter.

The new Chief Secretary to the Treasury, Liberal Democrat David Laws, has had to resign after just 16 days in the new coalition Government due to erroneous expense claims amounting to over £40,000 for rental charges on his place of residence, which turned out to be the same address as his partner. He has tried to explain this amount of money away as part of an elaborate cover-up of his now known homosexuality: by claiming the money as rent on a room within a property, Mr. Laws had hoped for all intent and purposes his landlord wouldn’t be discovered to be his lover as well.

The white luminosity of this fresh coalition has already begun to dim and we’re not even through one month yet, so how can we expect it to last for five more years?