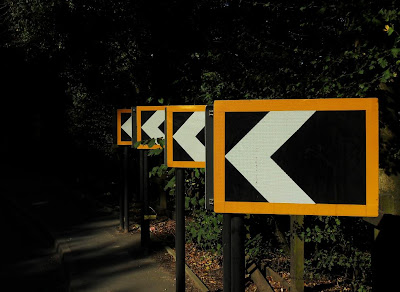 Recently, I have made a decision to spend more and more of my time in the photographic stratum of eBay and as a result, I am feeling a little stress-induced to say the least. I say stress-induced because of the many bad experiences I’ve had to endure - as a buyer and seller alike - and that’s basically down to the absolute cretinism a fair few eBayers show once they’re hidden behind their online monikers, regardless of whether their actions are deemed right or wrong.

The good news is the ability to leave feedback as a buyer is a wonderful thing and if you feel you’ve been sold something erroneously, then as a buyer you can leave a less-than-Twitter-length ramble after all avenues have been exhausted: you may not get a refund back and be stuck with a pile of useless shit of no merit whatsoever, but at least you can chose to inflict upon the unscrupulous seller with a red “No Entry” feedback symbol for the next twelve months and 80 characters of purest hatred.

So, one place where you’re going to come face-to-face with the eBay cretins is within the world of electronic consumer goods, so deciding to source digital cameras from this dubious online arena - where I can only take some faceless random’s word as currency for the truth - is an almighty gamble. Most of the time you’re okay as the stuff arrives in good working order; occasionally you really get a real break and meet one of the other few genuine sellers out there, reflected in the condition and care of their sent item. Once in a while though, you have the unpleasant task of dealing with one of the above mention morons, an experience that can render you completely apoplectic and void of altruism towards the public in general - both online and offline - even though it’s no-one else’s fault but your own.

Anyway, I figured I could indulge in my technology fetish by imploding all my credit cards’ limits at the start of the month on new kit, enjoy a frenzy of shutter-pressing action for a couple of weeks and then sell the cameras’ on - and hopefully for a small profit - after paying off the minimum payment my plastic bankers would demand. The first couple of camera buys worked out fine and after I’d splurged my satisfaction using them for a few hundred shots, I did sell them on and garner a modest profit (all sadly snapped up between eBay and PayPal’s fees though). Then just last week, I received a cretin’s camera...

It turned up about a week late and once I opened the box, the camera in question was just wrapped in a single sheet of newspaper, which its last eBay owner must have presumed was sufficient packaging. It looked a little rough around the edges and on closer inspection, I noticed that the back and front panels were slight askew, as if the camera had been opened at some time in its past. A press of the ‘ON’ button though resulted in a perfectly working camera that took pictures, shot video and played everything back on its LCD screen, so my immediate concern was alleviated and off out I popped to take some pictures.

I usually undertake the same three mile circuit when checking out any new cameras; mostly urban in its stretch, although bordering upon greenbelt in certain areas, this walk has a little of everything for the discerning photographer’s eye. At around the halfway mark, there is a stretch of pavement that runs from a driveway leading up to an isolated farmhouse and all along this section, a colourful flourish of hedgerow flowers can be found during the hotter months of the year. With camera firmly in hand, I stopped and began snapping away as I bent over a mixture of bloomed Bloody Cranesbills and Himalayan Balsam; after taking a few macro shots and checking them on the camera’s LCD, I became aware of something in my peripheral vision, positioned off to my right-hand side. I slowly glanced over...

Standing no more than twenty feet away was a rotund, red-faced woman, hands placed firmly on her hips as one her flip-flop clad feet tapped out an annoyed, flapping rhythm in time to the fluttering edges of her pulled-to pink dressing gown. I spotted her lips moving as she mouthed something at me, but still having my MP3 earphones lodged firmly in, I missed her delivery, so quickly yanked them out and nodded in her direction with an apologised, ‘sorry...?’

‘I SAID “WHAT DO YEH THINK YOU’RE DOING?!”’ came her barked response, now obviously pissed due to having to repeat her original statement once more.

Taking a couple of steps back towards this vision of hatred, I tried to rummage through the clutter of my memories, unsure of whether her outburst had been tinged with slight irony because she actually knew me and I’d just failed to recognise her due to leaving my glasses at home. However, on closer inspection through squinted eyes, I was still remiss of the lady in question’s identity, so could only offer a half-arsed smile in the hope of placating her temper; it didn’t appear to work...

‘Er, I’m just taking some pictures,’ I said and gestured towards the cluster of flourished flowers spread out before me. I glanced back across and noticed her gaze drop slightly to where I had pointed, then a split-second later her annoyed squint was back on me. I continued speaking with ‘you know, of these flowers... is that alright?!’ and waited for a response.

Silence as the woman’s extended glower began to burn a hole in my very soul. ‘Right, I see...’ finally came out of her pursed lips, seemingly extricated from some area of pure hatred, ‘... well it’ll have to be, won’t it?!’

I was just about to attempt a little joke to ease the atmosphere, when she turned and started back up her driveway, mumbling to herself as she went, so I called after her.

‘Sorry, I can’t quite hear you,’ I said, straining in her direction in order to hear the response. She stopped about twenty feet from me, just outside the farmhouse’s front door and spun around to face me once more, her hand grasping the door’s handle.

‘THERE ARE NO KIDS AROUND HERE FOR YOUR PICTURES, YOU SICK BASTARD,’ was yelled at top note in my direction, ‘SO GET OFF MY PROPERTY OR I’M SETTING THE DOGS ON YOU, RIGHT?!’

Needless to say, I was completely gobsmacked at the woman’s utterance and I stood peering at this semi-literate slop flotsam of female Humanity in shock, unable to absorb the words that had left her mouth. She just turned, opened her front door and stepped into her house; as the door began to swing shut, the woman stuck out her hand with two fingers raised and shouted ‘NOW F**K OFF, YOU... YOU PERVERT!’

Even after the woman had pulled her hand back through the closing door’s gap and its slam had sounded, I still found myself staring at the farmhouse in bewilderment, unsure of whether I was in reality or if I’d had an epileptic seizure of some kind. A few seconds later, I realised instantly that this twisted Matriarch of the farmyard was indeed real: the cacophonous barking snarls of two rabid Alsatians grew louder and louder as they bounded from behind an adjacent outbuilding, completely unleashed and intent on shredding me to bite-sized pieces.

Needless to say, I was off quicker than squits through a prolapsed rectum and actually amazed myself when I managed to vacate the area in such a short time span; however, the resulting post-adrenaline effects on a forty-odd year old body was a frightening lesson learned!

So, what’s the upshot of this experience? Well, a change in my camera-testing route has had to be implemented, in order to stay clear of the media brain-washed woman and her furry canine avengers; also, I’m now more paranoid about wandering around obliviously snapping off shots without realising my immediate surroundings or how people will perceive someone waving a camera around in their vicinity. Mostly though, I’ve changed my opinion regarding all the cretins and morons that inhabit eBay as sellers who have made my buying life difficult over the years, whether through accident or on-purpose.

Why the change of heart? Because as I’ve related in this story, there are far worse moronic imbeciles living out here in the real world who can really f**k things up face-to-face, without a need to hide behind a computer in order to achieve your total destruction through their misconception, stupidity and ignorance.

And remember, there’s no way of leaving any feedback to counter the irreversible damage that may be done from a chance meeting with one of these cretinous, numpty-headed c*nts...
Posted by Splosher