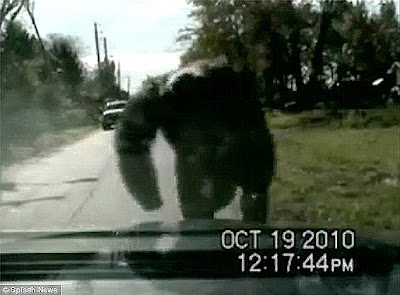 Breaking News: Rampaging Bigfoot caught on camera destroying Cop car!
Okay, I know it's not a true "Bigfoot" per se - or a Sasquatch, Yeren, Almas, Yeti, etc - but one look at this freeze-frame shot from a Police car's video camera could confuse a lot of people into believing media proof had finally been captured of the elusive, hairy hominoid running riot in a suburban US street. Disappointingly for Cryptozoologists the world over, the animal in this digital shot is just a common Chimpanzee; I say common but how widespread is it really to have a furious 21 stone female Chimp bounding around and smashing up a State Trooper’s vehicle with a wheelie bin, on a road, in broad daylight, in the year 2010?! As this has happened in the USA this week, us Brits can shake our heads and utter the usual “Only in America!” statement that goes some way to explaining the acceptance of our ex-colony’s somewhat bizarre and often confusing additions to their society and culture, although this animal-themed one is up there for sheer craziness.
Anyway, all credit to the Ape for using its superior intellect to create a battering ram out of the wheelie bin and to incorporate its wheels in order to garner more momentum and thus cause greater damage to the front of the car. The rest of the story relates the usual sorry additions to a tale of mismanaged owner-pet neglect: the Chimp had escaped its cage, it ran amok through the streets, was then tranquilised by a Vet and finally removed to an animal sanctuary for observation. No doubt the poor sod will be returned to its woefully inadequate suburban home in the future, where I’m sure the Chimp will make news once again, only hopefully not for killing someone next time...