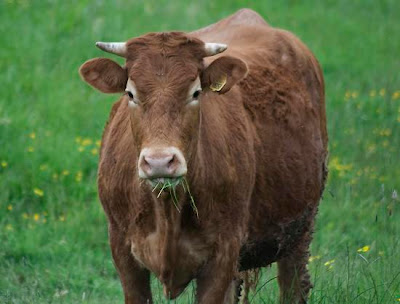 The headline says it all, really. Yep, it's an unbelievable but apparently true story from the newspaper, Jakarta Globe. We are informed that a young man of 18 by the name of Ngurah Alit was caught naked having sex with a Cow in a paddy field near to Jembrana, then tried to excuse his actions by blaming the heifer for flirting with him!

Things got a lot worse for this inter-species Lothario because in order to cleanse the village of his bestial transgression, the poor lad was forced to wed the animal before his neighbours, Police and interested journalists. It all seems to have been a little too much for Ngurah Alit though as he ended up collapsing at the ceremony due to the stress and embarrassment of his new-found infamy. And if you think it couldn't get any worse, then just don't ask what happened to the Cow...

Here's the complete article over at the Jakarta Globe:

http://www.thejakartaglobe.com/static/national/380095.html
Posted by Splosher No comments: