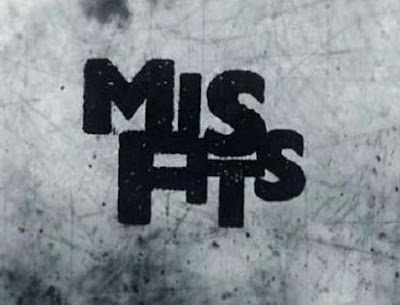 Here's a little animation of frames taken from Misfits episode five, series two for all the fans out there who were wanting Alisha to touch Nathan but never got their wish to see what additional filth would sprout from his mouth. Below is the proof they actually DID touch, albeit unintentionally so and apparently without any effect whatsoever! Please click the image beneath for the animation:
(All images (c) E4 & Clerkenwell Films)

A genuine mistake by the makers of Misfits or was Nathan completely immune from any outside influence upon his person due to the power of "immortality" - or "luck of the Irish" as it could be interrupted - that was bestowed upon him after the lightning strike? Well, this is a moot point now as the writers had the damn fool sell his gift, along with Alisha's "Rape me now!" power, thus removing any potential future interaction of their storm-induced personality traits in series 3.
A great loss to Misfits fans everywhere...
Posted by Splosher