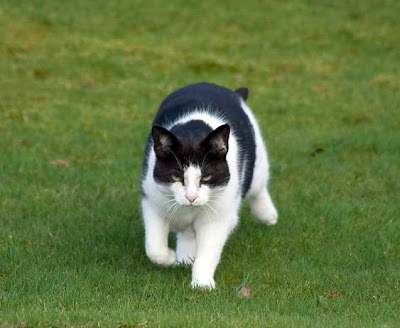 It’s a while since I last wrote about one of my dreams - see "Dreams of what lie beneath" for more details - and so by chance, I just happened to have had a very vivid and quite disturbing dream last night. This subconscious rumination’s origin seems to have been a letter I received in the morning post the day before, but which I’d put off reading for 24 hours due to the potential implications laid out within its organised font. I will forsake exploring what was in the letter until after I’ve explained the slumbered intricacies that I can recall for this blog entry, but feel free to guess as you read along from the imagery, metaphors and subtexts used in this story...


My fanciful remembrance begins with being stood on a high, Alpine-type meadow with a Pine forest to my front-left, which appeared to allow the rest of the meadow to run as a fire break between its plantations. Above, beneath an ice-blue sky dotted with white fluffs of tattered clouds, a bright sunshine flashed on dancing grass blades off towards a panorama of snow-dusted mountain peaks that ringed the horizon for far as my eyes could see. I took a deep breath of chilled air and absorbed my dreamscape of near-perfection.

Glancing downwards, I noticed I had a bulky camera dangling from my neck on a strap. Raising it up to my eye, I snapped off a shot of the panorama, but realised it wasn’t a modern digital camera but an old instant film camera; I watched a small square of stiff photographic paper unfurl slowly from its intricate innards and once I’d given it a quick waft, the image began to appear, albeit in sepia tones of memories past.

Standing just before me down the meadow’s slope was an old Wild West-style Locomotive, complete with wide funnel and cattle plough adorning its front end, which just had its coal carriage attached behind. The train’s facade appeared old, worn and rusting slightly beneath its exterior finish of matt black and squinting, I noticed this aging Titan’s name: ‘Flotsam’. It sat upon a single span of track, which appeared to be the start of a wooden bridge and the cross-section of supporting slats grew in size as my view disappeared behind the Pine trees before me. With smoky puffs of steam escaping in time with the Locomotive’s idling engine and the coal carriage backed-up against a large buffer, the machine looked ready for a journey down the train line.

Just then, I became aware of some talking and just to the side of the Locomotive, I noticed a troop of small children, who for all intent and purpose appeared to be on a school trip, presided over by an adult who was animatedly pointing at the train. Listening however brought no further understanding of their discussions and I soon realised that the kids in question were Asian, perhaps speaking Chinese. They had no idea I was watching them and they seemed to be amazed at the Locomotive, each jotting down upon their individual notebooks items of interest until finally, the teacher turned and they traipsed off following him in a line.

As this childhood excitement was going on below, I began to reverse slightly up the meadow to see the train track behind the trees, and slowly I was rewarded with a stunning view: the track was indeed elevated upon a wooden slat bridge due to a vast natural canyon that lay just beyond the Pine tree plantation. Off in the far distance in the base of this chasm was set the heat-shimmering vision of a town, its many windows glinting in the sun and sending back false telegraphy towards where I was standing.

Suddenly, with my elevated position, I spotted a terrible problem: the train track and bridge were non-existent a couple of hundred metres further over the edge of the canyon’s cliff walls, having previously suffered some catastrophic collapse. As I squinted at the tendril-like steel rails curling out into the emptiness of the chasm, I spotted movement from the corner of my eye near the train and quickly turned.

There, standing on the Locomotive’s drivers’ plate, was one of the small Chinese children, a little girl I quickly deduced from her Pigtails and the pink rucksack she was wearing between her shoulders. Before I could even attempt to shout, I watched her in slow-motion grasp and release a lever, letting it flap forwards loosely with a clunk: I felt a rush of adrenaline as my mouth opened to scream, which was then interrupted by the little girl’s teacher calling for her off to one side. Hearing this, the girl jumped down from the train into the swirling, knee-high grass, cast a giggling smile my way and rapidly skirted away, leaving me with my gob agape.

I can recall hearing my own voice feebly shout out, ‘HEY, KID?!’ in vain and then lowly to myself, ‘What the hell’s going on...?!’ My pondering was cut short with the distinct sound of cast iron wheels finding traction on steel tracks as metallic screeches began to get louder with each inch the Locomotive started to move. I knew there was no way I could reach the brake lever and stop what was unfolding and so in an instant, I thought getting pictures of this inevitable and unavoidable disaster seemed like the best idea (and probably would be financially viable within this reverie of my mind).

So I started snapping shots away feverously and tried to keep pace as the Locomotive picked-up speed on the short stretch of track between the buffer and the gorge; as I moved faster down the meadow and into the firebreak between the Pine trees, I eventually lost sight of the train’s route, but knew if I could reach the cliff edge of the meadow, I would be able to peer around the Pine trees and capture the train on film as it flew into airy oblivion. My pace had now developed into a run and I glanced at the camera, still spitting out photographs; looking behind I saw there was just a line of fluttering white squares suspended in the air, gradually developing their individual sepia-stained stories as they disappeared into the emerald grass.

On each side of the thin grassy fire break I was now racing along stood the Pine plantations, their dark and eerie interiors in stark contrast to the green brilliance of the meadow’s chlorophyll-drenched world. With just fifty metres to go and with the dull rumbling of the Locomotive careening to its gravity-induced destiny echoing across the meadow, I became aware of looming shapes moving parallel with me within the murk of the tree trunks; skirting across the accumulated years of dead Pine needles, these misshapen shadows morphed their pitch bulks as they prowled, stalked and corralled in time with my journey and I continued onwards with a sense of growing discomfort.

Eventually, I finally reached the end of the firebreak meadow and stood on the edge of its steep cliff, peering out and down: the vast gap must have been half a mile across with an incline of thousands of feet to drop before your body smashed onto jagged scree and talus. The wooden remnants of the destroyed bridge lay strewn in the valley below, scattered as spilled matchsticks from a tossed box and I noticed that I had been right in my assumption: you could indeed see the twisted ends of the snapped rails jutting from behind the Pine trees. So, with an accelerating sound of approaching doom heading towards the cavernous drop, I started to lift the camera in order to freeze the Locomotive’s demise in sepia tones.

‘DON’T MOVE A MUSCLE!!!’ was barked out in a female voice close-by. Shocked, I spun around and was faced with a suntanned, blonde-haired woman in a Safari hat and khaki jacket, standing up in an open-top Land Rover. The Jeep was about 20 metres from me, was battered looking and adorned with wire mesh to its doors and windows. Squinting, I was about to ask her what the problem was when she continued to speak in a loud and now obviously scared voice, ‘JUST-STAY-STILL...’ she said with a raised, open-palmed hand to emphasise the brevity of her command. Before I could even answer, the undergrowth on both sides of the meadow’s Pine trees exploded as the ‘shadows’ burst forth into the sunshine and revealed themselves as three snarling Lions, bounding towards me with teeth bared and roaring breath.

I was frozen to the spot and everything went into slow-motion: the women’s face wracked with horror as her safari hat began to come off her head; the Lions’ enormous pads kicking up spinning flower heads into the dusty air as they bore down; behind me, the locomotive’s black chimney plumes belching a cry for help as its cattle plough and front wheels lost the track beneath them. I had nowhere to go except over the cliff to my death on the rocks below or to stand still and get torn to pieces by ravenous Lions intent on making a meal of me.

And what did I do? I lifted the camera, looked through the viewfinder at the chaos before me and pressed the shutter. Watching the uncurling of the photo as it came into this world calmed me from my inevitable death and as I shook it to activate the chemical process of development, I glanced upwards for a final time. The woman’s safari hat was spinning from her vicinity with the centrifugal force of a Frisbee, the Lions’ roars were threatening to burst my eardrums and the Locomotive’s downward trajectory had resulted in the appearance of a banana’s bend.

Holding up the picture, I watched as the sepia tones began to form the shapes of the scene before me and a strange thing began to happen: as the picture became more solid, the action surrounding me slowed more and more. Eventually, I held in my hand a fully-formed photograph with a time-frozen reality behind it; pouncing Lions stopped in mid-air like suspended granite statues and a strange woman’s last seconds now etched upon her motionless face for an eternity.

Suddenly though came the unmistakable sound of the Locomotive tumbling to its noisy death thousands of feet below in the chasm. As I turned and watched scattering cascades of coke leaving the coal carriage and spreading out like a swarm of black Bees, I realised that I could only stop what I'd managed to capture on the camera’s film through its lens and not all outcomes can be controlled by the person forced to live a particular reality...

To surmise what allegories my dream may hold - a train wreck named 'Flotsam' and a Lions’ den are pretty obvious but what the brake-tampering Chinese kid, the time-freezing camera and the hat-wearing Safari woman mean are completely open for analysis - so I think a little soul-searching is in order to attain the inner truth.

Now, the letter that instigated this fanciful dream was attached to my returned script from the BBC Writers Room. It basically said that unfortunately they were going to pass on my script, but thanked me for sending it and even gave me written feedback, something I understand from the letter not everyone gets. So, there you have it: one script down, two scripts to go at the BBC and I can only hope to finish my latest screenplay ASAP in order to perpetuate the agony of continual rejection!
Posted by Splosher