Just when life couldn't get any worse... pt1 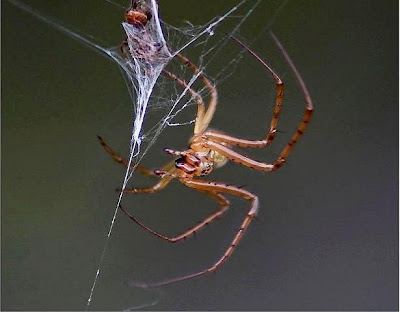 The above title says it all, really. I'm now dwelling in a "bad luck" period of my life and it's only lasted for the previous 30 years, so fingers' crossed it'll be over within the next 10 and I might just be able to enjoy a couple of weeks before the Grim Reaper claims what's rightfully His. Now don't get me wrong, I do occasionally get a bit of luck but what I'm on about is the inordinate, soul-crushing amount of Malevolent misfortune that seems to plague my everyday existence, even though I'm trying to put a brave face on with that description!
Let's start with a 24 hour period from last month, say Monday to Tuesday for the sake of argument. I was out taking photo's on the local Moor in-between the usual British downpours, clutching a Canon 350d which had a 300mm telephoto zoom attached to its front when I spotted a Kestrel flit overhead, so I clambered up an embankment in order to get a picture of its famous hover. Now, this being Moorland, it had actually rained a couple of hours before and these "wet" raindrops were still lingering upon the grass as I hauled myself upwards and onwards to the crest of dry-stone wall, just in time to get a couple of blurred, underexposed shots of a misshapen dot in the distance.

Well, still clutching the camera one-handed, War-photographer style as if racing through the streets of Saigon to a helicopter circa 1975, I descended back towards the path 10 feet below me, blissfully unaware of the approaching havoc. Fate had now decided my chips were ready to be cashed in and this happy game was over for the foreseeable future, so as my left boot met with some of those "wet" raindrops on the grass, slippage was the only outcome available. Instinctively feeling a backward slide coming on - and not wanting to break my coccyx any time soon - I somehow compensated by projecting myself forward. The momentum induced, however, could only result in one outcome: head over heels seemed inevitable and a face-first fall of 5 feet onto a gravel path whilst holding a £500 camera and lens tossed into the bargain!

Now, people say that when something bad happens, everything seems to go into slow-motion and the unfolding scene can appear almost dream-like. Nope, didn't quite happen like that for me I'm afraid, as my catapulting forward ended almost as soon as it had started, only with a terrific crunching impact onto the jagged construction aggregate which lay before me. With me now front-down, in bewildered shock and a fast increasing agony running up my prostrated form, I heard a guttural moan coming from somewhere close-by, which in turn I found was emanating from within myself as I started screaming and cursing the Gods for this turn of events.

Glancing immediately at the camera, I could see that it was fine as my right-hand held it slightly aloft and above the path's gravel covering and a wave of relief passed through me as I realised the power of my subconscious mind in protecting against damaging Canon cameras, although I can't vouch for other manufacturers at this moment in time. My left-hand side had taken the brunt of the fall and I was now becoming aware of it being damp, something which caused me to worry as I didn't wish to add insult to injury with having wet myself, so was relieved when I discovered my clothes had just been absorbing rainwater from the top of the path!

However, things don't work out that easily for the unlucky one and as I dragged myself to my feet, a strong stabbing pain from my left-hand knee and elbow told me more of my current health than any number of Doctor's visits might have hoped to achieve. The pain was horrendous as I attempted to stand upon the bad leg and I just managed to hobble across the path and flumped down on the opposite banking, quickly double-checking the camera and when sure all was okay, I put it away into my bag, the same bag I'd just crushed between myself and the gravel. Carefully rolling up my waterproof trouser leg, I was faced with a growing bump on my left-knee but just below at the top of my Tibia was where I'd taken all the impact of the tumble - no fat + all bone = full pain and suffering!

Needless to say, the walk back to the car park (about 3 miles with a drop in elevation from 1400 feet to 600 feet above sea-level) was conducted with the grace of a Zombie from a George A. Romero movie: slow shuffling, stiff-legged stumbling with a pain-racked grimace adorning the face, not an ounce of friendliness projected towards people passing and blatant cursing-out-loud, whether aware of being alone or not as the tears ran stinging in my eyes. This beasting continued for the next hour: over Stiles and across brooks, through undergrowth and muddy puddles, until finally I reached the relative haven of the car park and my vehicle. I could now finally assess my new left-sided bodily problems: knee/shin bone = knackered with possible fracture; elbow = painful but jacket was padded, so damage hopefully to a minimum; palm = pulled grit from the holes, so presume will be okay; pelvis point = tender but again was behind padding so may be fine in long run.

With the new added difficulty, I managed to slide under my car's steering column, started the engine, painfully pressed down the clutch and finally put it into 1st gear and carefully pulled away from the parking spot. Checking the rear-view mirror as I slowly rolled away, I let out a sigh of relief as the thought of being stranded with a broken leg on top of the Moors began to fade and the car's heater started to warm my extremities and dry the damp of my clothes. Through the windscreen, this long day was dying and twilight rising, the drizzling rain had stopped and only 6 miles of driving lay before me and my front door, so I began to relax and enjoy the feeling of comfort my car now afforded me. After all, I only had 6 miles to go so what could possibly go wrong?

*"Just when life couldn't get any worse... pt 2" continues with the 10th november blog entry*
Posted by Splosher