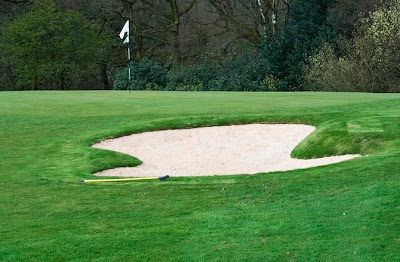 See, that’s the problem. Golf has carved a niche within the sport’s world as an exclusive, money-orientated but genial and fair-played game, albeit with confusing rules for the Layman and an inordinate amount of water usage for its green, green grass. An infuriating amalgamated slop of 19th century Upper-Class snobbery and 20th century Middle-Class selfishness that’s played week in, week out by people who’ve long past caring what society thinks of obnoxiousness as a beneficial attribute. The time-frozen Bastion of the many Golf Clubs across the UK becomes immediately apparent once you slide beneath their automatic barriers: the smell of freshly-trimmed grass wafts enticingly in the air, the electrical hum of battery-powered carts buffets along to the chorus of the course and the monopolisation of multi-coloured, man-made slacks emphasize why there isn’t a pair of jeans in sight. Indeed, I’m sure that within the fairways’ bushes, shrubs and undergrowths, tiny covert cameras with denim-detecting software are trained on all comers, scanning everyone who crosses the courses’ sacred thresholds, ready to alert the upper echelons if any weft threads of cotton twill attempt entry to what are now referred to in post-modern Britain as “The Emeralds within Society’s s**t pile”.

These closeted actions lead the general public to perceive Golfers as aloof, formal and cool; traits which are readily displayed and indeed encouraged towards non-members in order to maintain an appearance of solidarity against an unbalanced influx of scum from the other side of the 7 foot high electrified, perimeter fences that corral against attack. For the fully paid-up male affiliates, once they’re striding down the course with one another, bags on shoulders, trolleys or carts, they seem to revert back to a more primitive, childlike state of mind directly from the schoolyard: pithy remarks, blatant guffawing and gross hilarities are implemented during each others’ shots in order to put one another off and gain the upper hand during play. This has led to actual physical altercations between playing partners during their 18 holes and on one occasion, Golf carts were used in a game of “Fairway Joisting” with the people in question leaning out and swinging their drivers at one another like primordial Apes discovering their first bone clubs. Any trouble usually leads to the guilty members being called to account before a committee to explain their over exuberance, then it’s one of two things depending upon the outcome: either it’s trussed-up buck-naked for a full week down the driving range collecting the thousands of Golf balls which have been smashed left, right and centre or it’s trussed-up buck-naked and off to the club’s Captain for 6 of the best and a round thrashing with his favourite soft-spiked Golf shoes.

It’s even worse when we take a look at the Women folk who dwell within the privileged confines of the Golf club. Arriving in their swarms on the allocated ladies’ day sometime during the week, a quick perusal of the car park reveals the extent of their husband’s wealth and the moribund state of their marriages. Bags, clubs and shoes are pulled from the boots as a cacophony of shrill laughter and indecipherable yawing can be heard reverberating across the 1st tee and fluttering down the fairway. Under these circumstances, the male Golfers are noticeable in their absence, with the only poor examples left trapped working in the Pro shop or serving within the Club House; at least the Green keeping staff can attempt an escape on their mobile lawnmowers when faced with an errant female-smashed ball ricocheting from a bunker or a tree line.

But the real reason is more apparent when witnessing a lady Golfer playing her shot: a fast hacking motion is inflicted upon the circular, white-dimpled sphere, such a savage display of attack that they are known to go through 3 times as many balls within a monthly period as their male counterparts. But why would a small, innoculas globe bring about such a change in the female psyche? Perhaps the orbital focus of this aggression reminds the ladies of a solitary male gonad and in doing so, brings up a deep-seated Feminist rage long suppressed and held in check but now armed with a Golf club, alone and back in Mother Nature’s bosom, they can finally embrace the Amazonian fury spiralling from their subconscious and attempt a single-swing castration of Mankind?

Who really knows for sure but there was a rumour that a male Golfer was playing too slow as a four-ball Ladies party caught him up on the 4th green of a disclosed club somewhere in Wiltshire. No one can say with any certainty what transpired after that hole, but the Ladies played through to the 18th and finished first, with no sign of the fellow player. Only later were the eviscerated remains of the man found on the 5th hole’s winter tee, the 7th fairway’s midway bunker and the 12th green’s flag hole, whilst the ladies in question quaffed tea and cake, waxing lyrical between one another in the Club House. No one was ever brought to justice for the attack as two of the ladies in question were ex-Magistrates, one was a retired Police Superintendent and the other was a professional icier of cakes and buns. The official explanation was that the poor, unfortunate man was molested and killed by a large flock of mixed Corvid-family birds, including Rooks, Magpies and a solitary Jay, although no evidence has been produced to explain how his Ping putter was found inserted into his still-gurgling neck hole.

So, if you’re a keen follower of this game and its terminology, such as utterances like “shunt driving a three tonner”, “stroke floating a short lob”, “four putting a rim wobbler”, “rough tossing a rescue flip” and my personal favourite “wringing a long wood over the length”, then these sayings all make sense within your sporting vernacular. However, if you’ve just drawn a blank reading the previous descriptions, then I’m betting you’re not a fan of this wonderfully cold pastime called Golf: a perplexing study of perceived social standing, overt vehicular wealth and general one-up-man ship which can and occasionally does end in tragedy, all topped off with an inane hatred for all things Proletariat, played out daily across this country in the coveted safety of a 7-day, 12 month full membership.