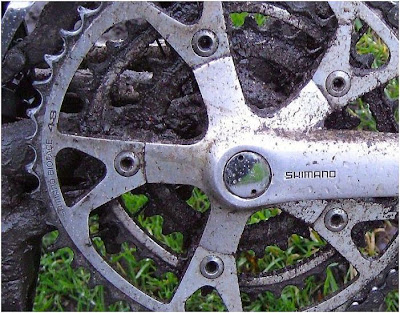 When you wake up from a night’s slumber, without any perceivable stress from the day before or untoward malice eating you away from inside, then I’m betting you probably expect a fairly easy trip through the approaching day? It’s not much to ask to just get on with a boring, unquestionable existence and strive to pass the following hours off without incident, mark them down as time well spent and slip off into a dreamland, with the hope to arise and face another fresh 24 hours, perpetually looped until your time’s up. There we are; a perfect little life.

However, when you’re forced to use a bicycle to get to work due to an accident which has snatched your car away from you (see past blog entries for more details), you could be excused for believing the enforced fitness regime that’s been thrust upon you without your say-so is a very bad thing indeed. There cannot be found any redeeming qualities in being reduced to panting like a knackered dog whilst becoming drenched in your own bodily fluids and developing a pulverised pelvis which had worked perfectly fine for the last forty years until forced to endure sitting on a razor blade. Indeed, this feeling of being hewn asunder by just your own weight, the pull of gravity and a neoprene-covered rectal torture device called a “seat” means you end up having completed your daily quota of cyclic punishment resembling someone who’s been forcibly abused by a convicted tamperer: out of breath, sweating profusely, accompanied with a sore arse and a red-raw gusset. Either that or you’ve had a fun day’s cycling.

When you’ve become accustomed to driving a car for years, the landscape changes without you being aware of its transformation: you’re cocooned in your post-modern time machine, flitting here and there in a fraction of the time it takes to walk or cycle the same distance but without the observational experiences afforded to the slower travellers. So, if you end up trudging a long forgotten route from your past by foot or on tyres, then it’s on ground level and off the beaten tracks that you’ll notice how altered things have become. An example of this adjustment became apparent to me and my bike when I decided to make time and cut some corners by flying down the muddy towpath of my local stretch of the Manchester Ship Canal: a massively expensive and expansive waterway which was used to ship the raw materials to the cotton Mills of the Pennines rather than pay any more money to Liverpool for use of their monopolised services from the docks.

Unbeknownst to me, we have now reassessed this post-industrial, manmade by-product of Capitalism as a part of our future environmental heritage, cleaned it up, fixed the locks and fitted mooring anchors to the banking at 100 yard intervals for the holiday barges which now putter along the canal’s maintained length. The mooring anchors appear like miniature harbour tie-offs, painted in black and white, forged from cast iron and securely raw-bolted into the towpath’s kerbing stones: strong enough to stop the movement of a 30 ton canal barge and if you’re unlucky enough to catch one with a bike pedal as you whizz past, you’ll find out the hard way why they were chosen in the first place. I discovered this simple fact for myself just the other day as I attempted to navigate a mud-filled rut on the canal’s towpath during a downpour that temporarily blinded me with excess water spray, resulting in my pedal hitting said towpath anchor. Instantaneously, I went from sliding around at 5 mile an hour on terra-firma to a violent emergency stop that propelled me off my bike and into a stretch of the canal, grinding my Gentleman’s area up the length of the handlebar stem along the way to being completely submerged beneath its greasy waters.

Thankfully the accumulated years of silting-up allowed me to almost immediately get to my feet and as I was spluttering and floundering, grasping at reeds to gain purchase in order to clamber out of the water, I became aware that I was emitting a warbling yodel of barely contained anger. At this point, an old man and his dog walking past were greeted by this vision of absolute lunacy: me, covered in stinking black silt, water gushing from my drenched clothes, clutching bunches of bank-side plants and attempting to climb from the canal whilst uncontrollably gasping for air and incomprehensibly screaming at the top of my lungs in an unbridled frenzy. I must have appeared like some crazed, drug-fuelled beast coming from the depths for him and he quickly dragged his barking dog onwards with a look of disbelief adorning his face and mouthing the words “What the f....!” as he hastily departed, leaving me to belly flop gradually onto the banking and flip around like a landed Tench.

Quite surprisingly, there were no injuries apart from a very sore pelvic bone and the bike survived the mooring anchor onslaught without any damage; however, once I’d pulled myself together on the bank, swung a leg across the bike’s frame and started to pedal, I became aware that I now weighed about 50 pound heavier due to the silt-impregnated clothes upon my back, thus lengthening my journey home considerably. I naively thought as I reached home that my good fortune had returned at long last, but how wrong could I have been as there was shortly worse to come.

This example of worst occurred only the other day as I sped along my usual five mile cyclic morning route, which consists of half off-road and half on-road, I became aware my pedalling legs were aching the more I progressed along the off-road section. “This is funny,” I thought as my back began to rattle with each passing puddle my tyres dipped into, “It shouldn’t be this hard going, should it?” so I turned an eye to any trees nearby to check the strength of the wind, but there was barely a flutter in the air. Glancing around the bike, I heard a strange noise over my earplugs renditions: a bizarre, rhythmic squeaking that fell in time with a complete 360 rotation of the bike’s crank and as I looked finally downwards, I was greeted with a rapidly deflating front tyre which went some way to explaining the noise I’d heard.

Stopping, I flicked the bike over and as I stood furiously trying to attach my pump to the front wheel’s valve, the heaven’s opened and the latest deluge of rain started to fall. A couple of thrusts of the now attached pump were met with the hiss of escaping air, so with a rising fury barely contained, I dragged my spare inner-tube from my rucksack, whizzed off the front wheel and changed everything over in less than five minutes, although the venomous spiel I was jettisoning from my mouth had some nearby Cows gazing at me whilst chewing their cud. Now drenched and on the way to developing a full boiling rage, I set off again, thinking to myself I was lucky to have the spare inner-tube with me but I would have to replace it as soon as possible, so with a soaked head down against the elements, I pushed onwards towards work.

Now, when I finally reached work and completed my chores like a good little worker bee and returned to my bike a few hours later, I discovered to my continually growing horror that I’d managed to achieve ANOTHER PUNCTURE in the SAME WHEEL! It was obviously now that my breaking point arose and so with a quivering lip and a newly-developed twitch to my left eye - possibly indicating an imminent embolism - I started pumping with all my life. As my place of work is very isolated and there’s no way of getting the bits and pieces I needed to get me back home, the only available option was to cross one’s fingers, get busy with the literal “elbow grease” and hope for the best.

For some reason that day, luck was on my side, but only at a price: yes the pump did put air into the tyre and rise it back up, thus enabling me to cycle home but the tyre was flat again after 300 yards. So I had to cycle as fast as possible against my tyre’s newly developed ventilation in order to gain ground, then stop and swiftly refill my front wheel using a plastic pump which began to flex and deform due to the build-up of heat: it was a toss-up for either an uninflatable inner-tube or an unpumpable pump. Yes, I believe that day was the icing on the s**ty cake of my life.

You see, the sustained trauma of attaining not just one but two punctures during a 5 mile trip - which was an imperative due to that thing called “work” - could almost have been perceived as God p***ing all over my chips from up on high, especially considering I didn’t have a puncture repair kit or another spare inner-tube. The good news is I’ve survived it without a cardiac arrest, brain haemorrhage or complete collapse of all my mental faculties, although I’m sure there’s plenty of time for any of them to raise their ugly little heads with all the added stress of the coming winter months. So, it’s time to knuckle down, hood raised against nature’s deathly period and have all the spares I can carry for the bike crammed into my already back-breaking rucksack because I’m pretty sure my bicycling fun’s only just begun...
Posted by Splosher