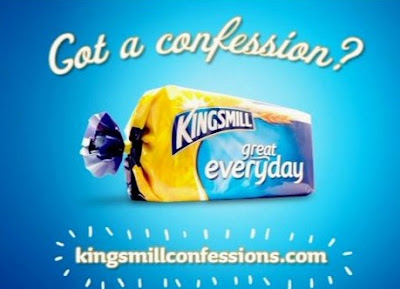 With the power of today’s media, there always appears to be a new way of dredging slutch from the bottom of the consumer barrel via some ad-agency’s latest idea, presumably thought up by their newest, hippest and Twittering whizz-kid, which is then patted into a mould and crammed down our wanton throats. From this month comes a duo of semi-hardened sculptures of slop - their thin Crème Brule crusts straining to contain their fetid stench - that are the latest exponents from Kingsmill the bread maker entitled “Kingsmill Confessions”; a collection of jovial little 10 seconds snippets which revel in the concept of Humanity’s Selfish Gene and its unerring, primordial urge to look after oneself above all else.

The ones I’ve seen so far are split into two equally vapid, dream-related scenarios of female empowerment and downright greed-orientated social thrusting, as we as viewers are then subjected to quite possibly the greatest twin examples of conniving since the “Ladette” culture was thrust upon us. Accompanying these visuals are voiceovers that are either real people speaking after being coached by a RADA drama teacher or are performed by actresses trying to sound like normal, run-of-the-mill people: either way, the vocal delivery falls somewhere between the playful ruminations of a Blue Peter presenter and the efficient computerized manner of a Stepford Wife. This insistence to portray everyone on TV as “normal as you or me” is a disparaging example of complete ownership by media suggestion and if the actions shown in these adverts are anything to go by, then there’s not much hope for any of us unless we’re willing to backstab, lie and cheat to get ahead in life.

The first advert reveals an early-morning riser, sat up in her double bed whilst her partner slumbers away wrapped in the duvet beside her. Wracked with hunger, the woman is planning her breakfast and is obviously hallucinating due to the conveyer belt of snacks passing by the end of the bed, Generation Game style. But hang on! She begins to explain to us in an ethereal voice that she’s not having a pictorial seizure or a mini-stroke but the line of food is really just in her head after all: she’s that famished she’s fantasising about a bacon butty, made with nothing other than the God-given goodness of Kingsmill “Little-Big Loaf” bread. Ah, bless her little tummy-gurgling, psychotic episode.

Suddenly, her partner begins to cuddle up to her in his dreamy state and this is all that’s needed for a look to fracture her face that could be excused to mean he’s just soiled the bed. Now the lies start flowing from her wanton, swine-obsessed mouth: “‘Phone!” slithers out of her and then she’s gone, tip toeing down the stairs to the tinkle of piano keys, whilst the poor bloke is left chilled by an empty space and wondering if he’s awoken deaf as he didn’t hear an incoming call. Once downstairs, she dives into constructing what quite possibly is the most perfect looking bacon butty ever, clasping and biting into something which appears to be a CGI constructed image. In a way, this is an apt conclusion brought about by her sneaking selfishness; with just virtual polygons and texture mapping to slake her hunger, she’s left perpetually scoffing this digital facade without hope of sustenance, from which each bite sends her papillae spiralling deeper into a personal, sallow Hell.

As she drones on with her voiceover, we can finally see that her bed-bound fellow is now awake and propped-up, a forlorn look on his face as he follows the same conveyor belt, only now it’s filled with consumer goods and he probably wonders why he can smell bacon. The slouch in his body position reveals that he’s accepted his girlfriend is most likely having an affair behind his back, hence the reason why she keeps disappearing on the pretence to take phantom ‘phone calls every Saturday morning. So, another bloke is castigated by the clever manipulation of female ingenuity and confused to the point of desperation due to the lack of Socratic debate between the two sexes. We can only presume these misread signs and lack of communication result in a blazing row from which he packs his bags, calls her every name under the Sun to her tear-stained, mystified face and then as he walks out, he snaps his SIM card before her eyes to show she’ll never be able to contact him again. In most peoples’ book, that’s a result!

The second advert in this duo of effluence again introduces a woman who wishes to scheme, fib and deceive her husband in order to achieve eating his carefully prepared cheese and pickle sandwich, which he’s just made and puts into the fridge on a plate before leaving the room. This lady obviously doesn’t give a damn that this pristine savoury snack between two Kingsmill pieces of bread has been lovingly made by a man who probably only has the lunch break to look forward to in his moribund, soul-destroying job, a position he’s trapped in due to her insistence they remortgage the house in order to get the £15,000 fitted kitchen this garbage is being played out in.

So as he departs, the woman in question then becomes consumed with nothing but cartoon images of the cheese butty yodelling to her in her mind’s eye, accompanied with side-glancing, a telltale sign of paranoia: oh dear, it gets worse. Approaching the fridge with her arm outstretched, we see that the appliance’s door has turned into a UFO abduction scene, with thrusting neon light shafts escaping from behind its seal and swirling in a kaleidoscope around her as she herself admits “I just had to have it!”. She appears to have been reduced to something akin to a crystal meth addict over a cheese sarnie, which if left unchecked will probably result in her hanging around public toilets somewhere offering herself to all and sundry for nothing more than a single slice of wholemeal with a skim of marg' on it.

Stealing what’s not hers to take, this vacuous shell of a human being completely troughs down the poor fellow’s dinner with the skill of a starving down and out who’s not eaten for nearly a week. We then see the poor guy’s confused, despondent face as he tries to understand where his missing breaded snack has gone as he clutches an empty lunchbox, isolated in the loneliness of his existence. Cut to “Lost” posters draped on trees in the neighbourhood and the fact she’s convinced him he hadn’t even made the bloody thing in the first place and she then tells us “He thinks he’s going Cuckoo!” with a tone of barely-contained hilarity towards her Cuckold other half. Her voiceover drones on with self-justification for undertaking a blatant theft from a loved one: no shame and no consequence, so it’ll be a cracking tale to share with the girls and hopefully they’ll attempt it, thus spreading the greed like a virus through their Witches’ Coven.

How their lives together post-sandwich stealing moment will pan out nobody knows, but perhaps the guy returns home after another crushing day at work and mentions the morning magic trick of his disappearing sandwich, to which his wife lets slip with a mocking tone and sly smirk that she’d snaffled it before he’d even left the house that morning. The resulting psychological breakdown he suffers goes some way to excusing his murderous actions and even during his sentencing in court to a mental institution, the Judge makes it clear how mitigating circumstances led to his actions “You just can’t go around eating another man’s lunchtime snack without there being consequences!”

Kingsmill’s Confessions pay £250 in Red Letter day vouchers each month for their best online 150 word’s of gibberish, although I wonder what they’d make of people texting a witty, Twitter length, bite-sized snippet that tells of everyone eating Warburton’s or Hovis rather than their square-pressed slices of starch? Anyway, here is my little compact yarn which I’m thinking of submitting, not for the money but in the hope that it may just bring down the entire server for a day or two, thus giving everybody a bit of breathing space to see this drivel for what it really is:

“Sick of the Wife eating my ham, so decided to s**t in the sweet pickle, watch her eat it & then tell her what I'd done! So funny I s**t myself all over again!”
Posted by Splosher