The ballad of T-Mobile Solo: The horror, the horror... 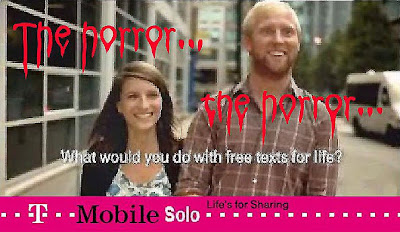 Adverts. They have always been designed to showcase what a healthy culture needs and cannot live without and this is achieved via our total belief in “living the dream” which is basically consumerism, a stark lesson in the haves and have-nots within a divided society. So this is the dichotomy we all face in our throwaway culture: to feel self-fulfilled for possessing what’s new and trendy or to feel absolutely pathetic for not being wealthy enough to afford the stuff being continually rammed down our throats. In that respect then, we’re all continually bombarded by these self-esteem attacks and the advertisers play on this knowledge by plunging their ”BUY NOW! BUY NEW! KEEP BUYING!” knife into us all, over and over and over again...

Nowhere else in media-land is this more noticeable than in the lexicon of technology, which can mean only one thing: the mobile telephone, their manufacturers and the mobile network suppliers. There is no need whatsoever for anyone to update a mobile ‘phone they’ve had for the last 2 or 3 years, let alone the last 12 weeks, but we’re all assured that if the one we currently own weighs more than a nano-hair or its camera’s mega-pixel count doesn’t match a £3000 digital SLR or the rapid spraying of streaming video is missing from the handset, then we’re unfashionable and our end is nigh. So this is justification for the network suppliers to raise more and more of their jagged steel, horizon destroying telecommunication’s masts, perpetuating the exaggeration of superseded telephonic design and the need to replace one’s perfectly fine instrument with newer one via Television advertising.

Let’s take just one example of this seconds-only art form, namely the new T-Mobile “Solo” advert which is all over the electric box at the minute and is quite possibly one of the greatest accidental exposures of this vapid, collusive toss to have ever crept out of the advertising realm. All of this company’s adverts - usual tagline “Life’s for sharing” - sit uncomfortably astride the notion of big public sing-songs that bring everyone together but only if you’re young, cute and media-savvy; the old duffers are visibly absent from this “Logan’s Run” type world and if they happen to have sneaked past the editors’ snips, then they literally do stand out like old duffers in a sea of simple kiddie chuckles, incredibly stupid hats and parental financial support.

Their new Solo one assaults us with a more restrained viewpoint: a brightly lit street in the daytime is shown from different angles and the camera is trained upon so-called “normal” people, who react once a series of too-good-to-be-true questions are flung their way by the male narrator. First up are the stereotypical 2000s male and female combination unit: in this day and age, we cannot risk presuming they’re an “item” and causing offence as they may be brother & sister or just friends in this mixed-up, metro-sexual ideal we all dwell within, so let’s leave it ambiguous. We hear the all-important, life-changing question emanate via voiceover:
NARRATOR
“What would you do with 500 free calls every month?”
The lad and girl both listen to this trite delivery and then what follows is the most appalling display of self-righteous indignation long since seen, let alone publically aired via TV. The girl stands, head lolling and mouth agape at this revelation being presented before them, which in her mind’s eye is probably akin to past marvels in history such as Neil Armstrong stepping onto the moon, before her vicarious trance is rudely shattered by what her male colleague allows to vomit from his mouth.

The fellow states he’d use the freebies to “... call my Nan and thank her for all the Christmas presents I’ve never thanked her for” (ah, bless his wispy, bum-fluff throat follicles), at which his female companion’s expression changes from a freebie-induced Elysium to a guffaw-induced series of side-glances and face scrunches in order to hide the absolute shame she’s now been plunged into by her octogenarian-concerned companion. Her self-absorbed, empty-headed display of potential Tourette’s induced ticking manages to impinge upon the already incredulous viewers a complete sense of bowel-twitching, nauseous despair and we’re only three seconds into this pitiful garbage. I’m pretty sure off-camera there was a massive row with tossed expletives and name calling, hateful half-truths about being useless in bed and then actual physical violence between them which resulted in a crippling, lifelong hatred for one another and complete loss of trust for all Humanity, but one can only wish, eh?

The next cretin in this wanton display of thrusting, telecom greed is a single, career-orientated and dynamic lady who ceases in mid-gait as she hears the male voiceover gargle and spit out his words as if he’s just cleared a rise of bile:
NARRATOR
“What would you do with free texts for life?”
Her now stunned features display a look as if faced with a stampede of Bison that have cut down her loved ones before her eyes and she blurts out a stream-of-consciousness response in a clipped, middle-class accent that serves to justify this banal garbage. “I’d be stuck to my ‘phone!” we hear her excitedly coo, just before cutting from her now delirious, slavering gob and wide-eyed hypnotic gaze, the same expression worn just prior to the horrifying confusion of a bad Psyclobin trip after ingesting a thousand magic mushrooms by mistake, but once again we can only live in hope that this is the case.

The rest of the miscreants that follow are thankfully kept silent as they struggle with holding up various placards stating the usual rhetoric associated with contracts and the intended soul-sucking that will occur once your blood oath has been attached to T-Mobile’s Solo extravaganza. To watch these giggling, gurning tools twist and turn their slop adorned, colour-coded boards in a hope of coming across as kooky and a little bit wacky only adds to the observer’s now rising psychotic episode, fuelling further sickening fantasies within their now damaged brains.

My own personal favourite delusional hallucination at the moment – although I’m always developing new additions each time the dross appears – is as follows: the players in this sorry debacle all get drenched by buckets of their own piss and are then flayed with an electrical flex which is still plugged into the wall and live with 240 volts, but even this punishment falls short of what’s deemed a justifiable retribution. Wishing to retrieve the lost 10 seconds of your life-force that’s just been stolen in the hope of dispelling the images burnt on your retinas, the sounds which have assaulted your ears and the taste left lingering in your mouth is to no avail and from that moment onwards, hollowness is your new friend.

Personally speaking, I cannot see any of the people involved in this travesty attaining any hope of redemption in this lifetime as they’re forever soiled in the cesspool of their own making, up to their necks in this stinking, fetid filth and unable to clean themselves for all eternity, the echo of their media-whore ramblings resounding infinitely within their souls.

But perhaps that’s just the misanthrope within me talking: after all, life’s for sharing isn’t it?
Posted by Splosher