A neighbourhood in waiting... pt 2 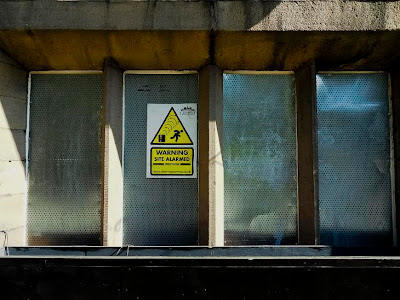 As the din continued underneath, I stood listening for a few minutes frozen behind my front door, safe in knowledge that my unlit vestibule and the coats draped across its security glass camouflaged me from the noise-inducing cretins below. The same loud thudding that had awoken me seemed a little louder now that it had less brickwork to dampen its echo and through the wired glass I caught a few murky, distorted shapes moving around in the stairwell beyond: actual morons were in my midst.

I turned the latch and creaked open my front door to a six-inch gap, which was just wide enough to survey the stairs leading down to the ground floor, my bin room doorway and my block’s security door. The coast appeared clear, so I widened the door’s gap, crept out and pulled it back until the latch tapped its receiver before slowly heading downwards into the unknown. With each step onward, I become aware of the morning’s crisp cold still lingering within the concrete construction of the stairwell, regardless of the thick, eggshell-flecked magnolia paint slapped upon the walls or the foam-backed, industrial-rough brown carpet under my feet; by the time I’d reached the bottom step, the chill had given my bare arms goose bumps and my breath was fogged.

There was no-one around, but I was right in my summation: the noise was indeed emanating from the once-empty flat that lay directly beneath mine and it sounded as if a troop of shaved Apes had taken up residence. Opening my bin room door, I stepped inside its oblong confines and checked to see if there were any signs of habitation to be seen, such as stripped wallpaper, empty paint cans or bagged-up items the last residents had left behind, but I found nothing. The open slats in the door to the world outside - which under normal circumstances relieved some of the combined stench of mine and my other two neighbours’ wheelie bins - funnelled freezing air towards me, so I spun around and vacated to the relative warmth of my stairwell once more.

Once back through however, I came face-to-face with a new addition to the bottom three steps of the stairs: a middle-aged woman with red-tipped dark hair was now sat blocking my escape upwards, so I offered a confused smile in her direction as I tried to evaluate who in Hell she actually was. The woman in question had the look of a sodden drinker, slouched as she was against the wooden banister and her head tilted as if in inebriated rest, even though the morning had barely started. I watched the smoke from a half-drawn fag that dangled between her fingers swirl about her, giving the impression that she was accustomed to the atmosphere of a pub taproom’s lock-in and as she tried to raise her eyebrows in a hope of focusing, I felt an unintended smirk ripple my closed mouth.

‘Oh, hiya Love, what’s your name?’ slipped from her smudged lips, chased by an exhaled lungful of smoke, as she tried to focus upon me; squinting with her one open eye in my direction, the woman spoke again in a too-loud-for-morning rasped voice. ‘Do you live here as well then? Mmm, well... things are looking up already!’ was followed by a screeched laugh so filthy that a shovelful of shit slops would appear a cleaner option in comparison.

I stuttered back a feeble question. ‘Er, hiya... are you moving in...?’ I asked, knowing the inevitable answer before it stumbled out into the cold space between us.

‘Yeah, just me and my lads,’ she said after sucking in another drag of her tab, ‘got three I have. One’s ten, other’s thirteen and the eldest’s sixteen... Christ, it’s hard work, I can tell you!’ and another burst of scatter-gun laughter reverberated throughout the stairwell. I felt my smile quickly dissipating as she continued speaking. ‘Noisy little bastards they are though,’ was followed by the latest blow of spent carbon monoxide in my direction, ‘but I’m sure you’ll find that out sooner than later, eh?!’ This time, her cretinous hoot was hacked up from the bottom of her tar-heavy chest and I sensed my lips stiffening into a rigid line as I watched her cough up and then spit out some mottled phlegm onto the carpet at my feet.

Apoplectic, I looked at the expelled throat Oyster now glistening on the floor, then raised my eyes' level to peer at this dishevelled Banshee of poverty: she was busy blindly nodding in my general direction as she wore a smoke-stained grin and had her legs akimbo in an effort to get comfortable. I felt my prostate expand with the latest flash of adrenaline my stressed body had apparently asked for and slowly closed my eyes as she began to speak her banal rhetoric once more.

‘I love ‘em really you know, even though they do my f**king head in,’ was delivered with all the inflection of some waiting for their next can of Special Brew. ‘Don’t worry, you’ll get used to their noise... I mean, there’s not much you can f**king do about it now anyway, is there?!’ spewed forth and rang through my pitch-black isolation, a cacophony of heckled hysterics on a seemingly endless loop sent to destroy my very being...

Then I woke up.

I lay there for a while, trying to control my racing pulse and disoriented state of mind, unsure of whether I’d had just a bad dream or a premonition of my future neighbours; it was only after analysing this slumber-shocker that I realised the odds of this scenario actually happening were in fact extremely high. You see, cretins come in all shapes and sizes throughout one’s life, regardless of social strata. Whether they’re born into poverty without a hope in Hell’s chance of clambering out of their cultural caste system or born into money, thus believing themselves elevated above mere mortals by parental wealth, it’s their personality traits that are same: obnoxiousness, ignorance and selfishness govern their lives and affect the people on the periphery of their unenlightened existences and in social housing, these attitudes are just the spark needed to kick start the Human tinderbox of stress, pain and suffering.

So, welcome to the post-letting policy-less world of First Choice Homes: a rented nightmare in-waiting...