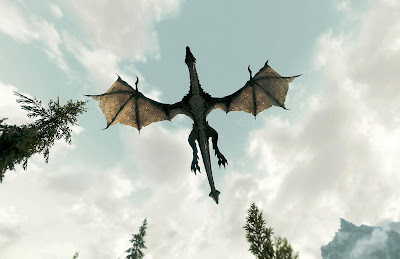 (Here is a short(ish) Skyrim-related story about someone languishing in Riften jail, for an unknown crime.)

‘I’m innocent I tell you!’ left my mouth and chased the guard along the dungeon corridor, as I stood rattling the riveted bars of my cell in frustration. I watched him reach the outer dungeon door leading back to Mistveil Keep, swing it open and as he stepped through, call back in response with a cackle, ‘We’ll see, but what you’ve done is a little more serious than just stealing a Giant’s Mammoth cheese butty...’


I flopped down onto the straw-strewn bedroll in the corner, furious that I had ended up tossed into the dungeon bowels of Riften jail, especially since I had been wearing shrouded boots during my night-time activities. Slumped against the roughly hewn wall stones that now contained me, I began to analyse my downfall as I peered aimlessly into the dim murk of the corridor beyond the bars; suddenly, my thoughts were interrupted by a tapping sound nearby...

Silence for a second or two, then the tapping continued again, accompanied this time with the clearing of someone’s throat. I glanced to the right-hand wall, sure the noise had emanated from the adjacent prisoner’s pen. Then, just beyond my bars there was a movement: squinting, I slowly got to my feet and moved towards it; there, an outstretched hand beckoned to me from the next cell along.

‘Name’s Sibbi, friend,’ came the faceless male voice’s utterance, ‘what they got you in here for then, eh?’ The hand’s fingers’ flexed outstretched, expecting a grasp to greet them.

‘Er, it’s a set-up!’ I squeezed my hand through one of the bars’ gaps and gave a quick shake, ‘I didn’t do anything, it’s all a terrible mistake! She came onto me!’ As I pulled my hand back through, I’m sure I caught a whiff of my favourite tipple wafting from my new friend’s place of residence, but put the smell down to all the stress: I mean, Black-Briar mead in a prisoner’s cell?!

‘Ah, women trouble, Lad! Join the club,’ he chuckled to himself, sounding much like a man whose social strata was untouchable by a spell in this dismal hellhole. Then, there was a slight pause before my fellow prisoner continued speaking. ‘By the way, if you’re open for some work, I could make it worth your while...’ was uttered in a whisper and it didn’t take an Arch Mage to work out what was coming next. ‘Listen, there’s this tone-deaf Nord wench called Svidi that I need sorting out. The quick “in-out”, if you know what I mean - ‘

Suddenly, the Mistveil Keep door was flung open and the guard returned once more, his footfalls echoing along the dampened length of the prison corridor as he approached my cell. As he strode past my next door neighbour’s barred abode, he tossed a side-glance inside but continued past until finally stopping at my door; his face-panelled helmet gave nothing away.

‘Right, on your feet, let’s be having you. You’re in luck,’ I stood to attention and shuffled across to the open doorway, stepping into the half-light of the corridor. ‘Jarl Law-Giver wants to see you personally as she’s taken a special interest in your case, being a woman and all...’ A fresh snigger came from behind the guard’s helmet as we started to move along the dingy walkway towards my date with destiny.

‘Be strong, Lad and don’t let that Jarl grind you down,’ I glanced across into the cell as I passed it and was surprised to see a palatial layout and a well-groomed man nodding his support back at me. ‘Remember what I said, my proposition’s still open...’ was slipped out between Sibbi’s half-closed lips in the hope the guard wouldn’t hear. He didn’t.

When we eventually reached the door up to Mistveil Keep and the guard pulled it open, I nervously stuttered a final attempt at an excuse for my actions: ‘Look, I’ve not done anything wrong!’

Sibbi shouted out his solidarity. ‘That’s it Lad, keep them guessing and never admit to nothing!’

The guard glanced down the passage towards the utterance and then cleared his throat before speaking just loud enough for Sibbi to hear. ‘Well, I suppose the only reason you were caught red-handed was because you tried to run away with your pants around your ankles, wasn’t it?!’ At this, the guard’s helmet began to tremble with mirth as his eyes danced in joyful illumination from his held aloft torch. ‘I mean, there’s no real excuse for being found tampering with a handcart in the middle of the night whilst half-naked, is there?!’

‘A HOUSECARL?! Well, they deserve it, the armour-wearing bints just keep on pestering!’ Sibbi yelled out, sounding slightly confused at the whole unravelling situation, but still trying to offer me a sliver of support.

The guard didn’t miss a beat: ‘No, not tampering with a “HOUSECARL”, this one’s been messing about with a “HANDCART”! Caught in the dead of night with his trousers yanked down, clutching a tub of troll fat and a Horker tusk, whilst trying to dry hump the top of that poor, innocent handcart!’

An eruption of shrieked hilarity was finally vented from within the guard’s helmet. I felt a flush of adrenaline crease me and wished to Sheogorath he’d just reveal this whole horrible mess to be a twisted game for his enjoyment: I instantly realised that this was probably correct and if so, why would the mad prince intervene before gaining maximum enjoyment from my squirming predicament?

As the door slowly swung to close behind me, all I could hear was Sibbi’s incredulousness sounding out in an ever increasing tone. ‘Did you say ”Tampering with a handcart”?! A HANDCART! As in a wooden, wheeled apparatus used for moving items of worth from one place to another?! Ha, by the Nines Lad, what’s wrong with you?!’

Cacophonous laughter howled out of Sibbi’s cell and reverberated back along the corridor to further mock my pathetic existence. With just a slight gap before the dungeon door finally snapped shut, I called out as loud as I could in the hope Stendarr would hear and be merciful with my deviant soul; ‘BUT I’M INNOCENT, HONESTLY!’