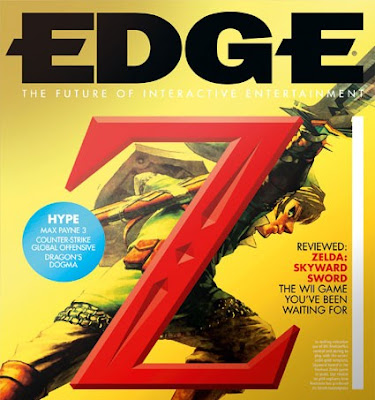 I have been an avid follower of Nintendo’s Zelda series of video games for the last twenty years or so - from the SNES’s A Link to the Past, through the majestical The Ocarina of Time and its multi-layered follow-up Majora’s Mask on the N64, on past the much-maligned Gamecube’s cell-shaded The Wind Waker, to the current Wii generation’s latest reiteration, Twilight Princess - so I felt my heart skip a beat with the release of The Legend of Zelda: Skyward Sword just last month.

All the gaming magazines’ reviews were unanimous in their adulation for the big N’s newest addition to their action-adventure RPG world, awarding the type of near-perfect scores video games can only dream of in the world of mediocre titles and lacklustre design. So I knew there was just one place to go for final clarification of Skyward Sword’s supposed brilliance and that was Future Publishing’s pre-eminent videogames magazine, EDGE: lo and behold, the latest Zelda title had been awarded the perfect 10-out-of-10 score...

I discovered the first issue of EDGE way back in 1993 whilst loitering in a local WH Smith: it was a time of painful technology transition (SNES and Mega Drives had run their 16 bit course and the 32 bit Saturn and Sony Playstation were still 12 months away from their Japanese launches) now thankfully lost in the annuals of history to our post-modern polygons, shiny pixel shaders and a worldwide video games addiction encompassing millions of devotees. That first issue was in a sealed plastic envelope, thus eliminating any chance of perusing its expensive pages without parting with your hard-earned coin, but just from grasping the hefty package in your hands, there was no doubt this newest monthly arrival was the Holy Grail for video gamers everywhere. To garner a perfect 10-out-of-10 score from the EDGE reviewers was unprecedented and over the last 18 years or so, very few titles have achieved this goal: those that have attained this Elysium are hailed as instant classics - which I whole heartedly agree with (except Rock Band 3!) - and there are only 14 titles to have done so:


So after another four years of waiting for the game designers to work their magic, we finally have the newest edition to the ongoing saga of Joseph Campbell archetypes: boy named Link is chosen by Fate, goes on a vast quest, becomes a man in the process and even gets the girl in the end, despite being dressed as a Pixie! The genre’s followers have seen it all before over successive platform releases, so does this title really deserve EDGE’s converted 10-out-of-10 score of perfection? More importantly, can Skyward Sword bring anything new to Zelda’s expansive virtual palette?

Palette is an apt simile here as the game designers have brought forth a sumptuously realised, pastel-shaded world for Link explore and the overall appearance does indeed resemble the artwork of Impressionism: dappled paint daubs and delicate smudged hues are spread across all of the three main worlds - the ubiquitous forest, volcano and desert are immediately recognisable motifs to the devout - plus the central starting hub of the game, which is now a floating chunk of Earth called Skyloft suspended high above the creamy swirl of buttered clouds. As the timeline’s now hundreds of years in advance (or prior maybe?) of previous Zelda games, we no longer have Epona as our trusty steed, nor do we have the speaking The King of the Red Lions boat as our travelling vessel, but are introduced to our new ‘vehicle’: a giant, mute Loftwing bird that just happens to be red, flies and is pretty much useless otherwise...

Rather than reiterate the game’s structure - we all know the Zelda narrative by now - or discuss its merits any further, let’s look at the most limiting aspect to enjoying Skyward Sword. Almost immediately, what should be unbridled fun is turned into a laborious strain and you, as a gamer, are pulled from this wonderfully realised polygon world by the inclusion of the most annoying and pointless game character implemented thus far in the history of video games: the purple-hued, virtual bint named Fi. We’ve had the best companions in the form of Navi in The Ocarina of Time and Tatl in Majora’s Mask; the Red Lion boat in The Wind Waker was also a great addition; but then things dropped to slightly annoying when Midna in Twilight Princess appeared and the storyline’s progression was governed by the different forms taken by this imp.

However, nothing from the past has prepared the gamer for the uncontrollable interruptions Fi brings to Skyward Sword: almost every single aspect of your gaming enjoyment is broken by some useless information this character spews forth in her metallic garble, which then must be cycled through with multiple presses of the A button, regardless of whether you already know its banality or not. Tossing out percentages that would make a Wall Street trader roll his eyes in confusion, this so-called helper is nothing but an hindrance and continually breaks the player’s attention, something not conducive to castting a spell of believability in the world of a video game. However, there’s worst to come in the form of the gaming vibrator...

Skyward Sword is the second Zelda game released for the console with a plastic stick for a controller - Twilight Princess was the first back in 2007 - so although other people have had experience of the ‘hack-and-slash’ motion of the wireless Wiimote, I have unfortunately not had the pleasure before. This is due to the fact I owned a Gamecube at the time of Twilight Princess’ original release and as Nintendo had been devising the game for so long their new console had actually arrived before the game was finished! However, both machines contained virtually the same chipsets still - the Wii just being the first mass experiment in wireless gaming - so the Big N at least honoured their existing user base by issuing two versions of Twilight Princess: one for the small square box (Gamecube with joypad use) and one for the small oblong box (Wii with Wiimote use).

Unfortunately, I will now be unable to complete Zelda: Skyward Sword for one reason and one reason only: I do not possess a Wiimotion+ controller anymore, as it lays shattered at my feet in a thousand, sharpened plastic shards. I’m sorry, but this is the most fitting end to the false prophet of future gaming and this particular silicon-sleeved dildo’s demise came about at the absolute pinnacle of infuriating Skyward Sword game designs - the Loftwing Spiral Charge teacher training on Skyloft.

You have to meet teacher Owlan on a platform and after instigating the usual A button pressed banality, he sends Link out astride his useless bird and gives him 120 seconds to hit 10 targets utilising a Spiral Charge that shatters them. These particular targets are stationary upon floating rocks, tucked into crevices and are also attached to other flying Loftwings, so with the two minute timer ticking, you the gamer must conjure up some deft Wiimotion+ moves in order to succeed and more importantly, progress within the game.

There’s the first problem. If you cannot complete this task, then the game’s storyline cannot continue, so you end up stuck and if you’ve already completed most of the side quests, then your future’s looking bleak stuck with some odd characters: Fledge keeps asking you to visit him in his room at night to check out his muscles (?!); Pipit’s mother Mallara wants you to continually dust her up and down, even to the point of swearing you to silence once you’ve performed your business (?!); and then there’s the potential serial killer, Strich whose insect-collecting fetish is only undertaken during the night and accompanied by calling Link different bug names whilst sniggering to himself!

Obviously, not the ideal place to find oneself isolated, so onto attempting to break the 10 targets in order to escape this floating Purgatory and the second problem arises. You instigate the task by speaking to the teacher, leaping off the platform and calling your Loftwing, then spend the 120 seconds trying to break the targets. However, if you miss a couple of the targets and you know there’s no way in Hyrule that you can pass the test, there’s no options to restart it: you have to continue with this hopeless attempt or reset back to the game’s main titles and reload your game once more. Either way, the outcome is pretty much the same; to have another go at this soul-destroying example of failed gaming mechanics, you must each and every time instigate the conversation with the teacher Owlan in order try again... over and over and over and over and over... you get the idea. And with each successive try, your excruciating fury is stoked a little more until explosion is inevitable...

Below is a picture I managed to capture just prior to the mental, physical and emotion collapse that resulted in this writer gibbering like an Ape whilst rolling around in his own cooled faeces: 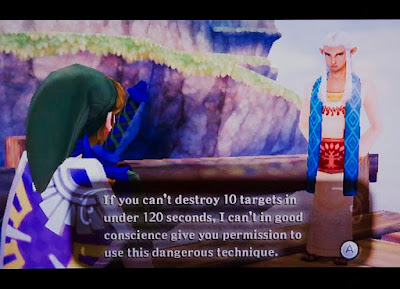 So, for the first time in my gaming life there will be a Zelda game left uncompleted, due to the fact that at my age I shouldn’t really be exploding in an apoplectic rage over a green felt-attired small boy's inability to fly a big, daft bird in a land of make-believe. I wanted so to love Skyward Sword as the Zelda series have been the only game releases of any importance in my gaming life for nearly twenty years; sadly however, this Nintendo love affair has now finally come to a shattering end (literally) and for that, I am terribly disappointed. It’s been an empty, hollow experience that has left me feeling breathlessly plundered and I’m aware that my future gaming will be lacking due to the perpetual cycle of ageing, but I suppose that is life's cruel trick: progression is with the young-at-heart and not moaning old farts.

As for EDGE, the video gaming magazine I have followed, converted and believed in over the last 18 years or so, I have just one message from this die-hard fan: please hire some people who actually understand the history of video games, specific titles’ timelines and the evolution of virtual genres. In doing so, 40 year old men can avoid the embarrassment of shaking a latex-covered phallic symbol in one hand, whilst cupping its nunchuck scrotal attachment in the other and your esteemed 10-out-of-10 score for sublime gaming perfection can be reinstated as the Elysium standard once again.

Because I’ve got to tell you, playing virtual onanism isn’t going to be everyone’s bag!
Posted by Splosher