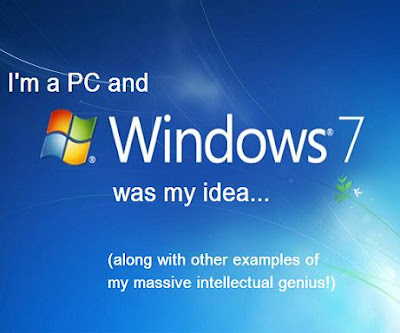 The Personal Computer. If you are like me and exist within the PC realm as opposed to flouncing around in Apple’s i-nonsense, designer wonderland, then just the mention of those three words can fill the vast majority of people with technophobic dread. It’s just the thought of trying to fix your own Windows-based system when the inevitable problems arise that brings about a spate of fevered brows, cold sweats and panic attacks across the world’s Microsoft users, much like how Apple users are confabulated when faced with the bewildering option of a second mouse button. Now obviously as PC users, we all have our own personal favourite version of Windows - which can be anything from ’95 to Millennium, ’98 to NT and even 3.1 or MS-DOS thrown into the mix - but what most people will be more than happy to be using is XP, their most successful operating system to date.

I however, whether through fault of my own or because I’m cursed, am currently stuck using Vista; the loathed, bastard-child of Microsoft pre-release experimentation that the general public shunned in either 32-bit or 64-bit guise. Each morning that I press my “On” button, I enter a realm of plea-bargaining with Lady Luck herself as my version of 64-bit Ultimate decides whether to give me one “Blue-Screen-Of-Death” (BSOD) or a multitude of boot crashes, all with the addition of file deletion, HD error scanning and hanging RAID starts. I have come to the conclusion that there must be millions of people in Hell right now, sat behind their computer desks and monitors, who are continually pressing the “On” button of their Vista-powered PCs, over and over again for an eternity of agonising frustration.

It’s no wonder we avoided Vista like the plague when faced with problems such as these and Microsoft listened to our disquiet from their corporate corners around the world, noting down the little niggles and the massive irritations we all were expressing. Then, analysing which bits could be salvaged and which could be tossed into the Windows shit-pit - along with such gems as OS/2, Windows 2000 and the great unmentionable, BOB (Utopia) - the software geeks started to structure their newest operating system behind closed doors. Then during most of last year, they began releasing public betas so they could tweak it to everyone’s tastes, no doubt at the insistence of Bill Gates himself, who needed to ensure success in the light of Vista’s failure against the old guard (Linux) and attempts of new alternatives (Google Chrome OS). So finally in October 2009 did big Bill deliver unto us his newest emission called Windows 7.

Now, I have no problem with Windows 7 and I expect it is a huge improvement over Vista but what I do have a monumental problem with are the UK television advertisements for Microsoft’s newest collection of digital ones and zeros entitled “Windows 7 was my idea”. As a collective, the ads are soul-crushingly horrendous and as per usual for our current obsession with reality-based themes, we are introduced to supposedly genuine, everyday people just like you and I who inform us that they are individually responsible for the newest operating system’s funky additions.

First up, we’re introduced to student Sophie and her “no worries” idea, which basically has her sitting in a university library at a table and addressing the camera directly with a clipped, Middle-Class accent we all know doesn’t really exist outside Four Weddings and a Funeral. She explains that she was absolutely sick and tired of crashes and losing her work, a thinly disguised attack upon the prostrate remnants of Vista, so she told Microsoft this and lo and behold, along came Windows 7, complete without any problems whatsoever! Now, I may not know much but selling an operating system like Windows, which has to run with a multitude of different hardware and software, as 100% compatible and bug-free will only bring pain and suffering, much along the lines of unleashing a personal version of HAL 9000 from 2001: a Space Odyssey. It took the most stable and popular Windows XP nearly five years and countless updates to arrive at a balanced format and we all know there’s only one operating system to be near-perfect and that is Apple’s own (need to wash my mouth out with soap and water and indulge in a little self-flagellation now).

Anyway, Sophie shows us her laptop is open: on closer inspection, we see her humble little computer has various windows open and is multi-tasking akin to something like IBM’s Big Blue going about its daily business formulating masses of data for the upkeep of the entire American military machine. Obviously now immeasurable chuffed with her interjected suggestion, Sophie ruminates on what else Microsoft can do for her life and whether they’ll pay her rent in future, only to be met with a near-by “SHHH!” from someone in the library. She drops her octaves for a second until she then declares that “I’m a PC and Windows 7 was my idea!” in a loud and proud voice, unashamed to break the constraints of the stuffed shirts of academia because she’s responsible for a self-sustaining and unbreakable digital wonderland. We can only hope that she was reported for this disturbance, dragged before a panel of the teaching staff and expelled, even as she attempts to justify her actions by spilling yet more gibberish regarding her invention for Microsoft. “You’ll all thank me one day for my crash-free system, you old fools!” Sophie will scream in their faces as she’s man-handled from the campus by burly security guards, starting a downward spiral which leads to living in a skip, eating thrown away Greggs and Subway leftovers from bins and selling herself for a slurp of crack. At any one of these precise moments, I wonder if she still thinks that Bill Gates will be financially grateful towards her for coming up with her no worries Windows 7 idea or if she’ll finally realise her simple ramblings were just due to being psychotic.

Next up with his idea is a health-conscious, bearded fellow in a gym called Ramin, who’s too busy balancing his laptop one-handed whilst wearing a pair of overly-revealing shorts and yapping to actually use the treadmills he’s stood next to. He starts explaining how he told Microsoft about his idea for “snapping” two windows on his screen to either side, thus creating an appearance of a book’s open pages and allowing any user to then instigate this wonderful new add-on for their own benefit. So as a sign of his massive intellect, Ramin’s bestowed upon us all a little something to make our lives easier and more fulfilled if we upgrade to Windows 7’s all-enveloping Elysium. However, if we disregard his single-palm, laptop poised delivery, we can see the practical application of snapping appears to be as frustrating to implement in reality as trying to create Gold from moss using a 12th century Alchemist’s rune-scrawled, goat skin parchment, i.e. too awkward and nigh-impossible.

Once Ramin gets going though, he becomes more fervent the longer he’s allowed to express the tale of his own talent and he finishes his speech stood on a treadmill, laptop still in hand, resembling an over-zealous spokesman of a Fascist junta whilst the other gym users appear blatantly uninterested in his polemic utterances. “I think I’m a genius” he states as he steps down from his elevated position after realising not a single syllable he’s digressed has been heard; “I’m going to walk away with my genius now!” is uttered in a last, desperate attempt at recognition but nothing is forthcoming and so we leave him looking rejected amidst the stale smell of sweat and the whine of rotating treadmill belts. Ramin half-heartedly delivers his final “I’m a PC and Windows 7 was my idea” line probably after spotting that his laptop has been infiltrated with masses of malware disguised as Asian lady-boy porn and now everyone in the gym is paying attention to him but for all the wrong reasons.

The most offensive example within this triple-bill of nauseating effluence arrives in the form of Crystal and her over-confident line delivery regarding her personal Windows 7 “taskbar” idea for all us other mortals to fawn over and congratulate her for being, well Crystal I suppose. Again, we’re in the company of someone who appears to be perpetually wandering about with an open notebook in their hands, so here we see the demonstration of Crystal’s egotistical genius played out during a journey in the back of a Taxi cab. Her idea boils down to an newly-included 2nd taskbar consisting of thumbnail pictures so that the semi-literate in this world can see what they’ve got open on their desktop, much like a pre-school infant peering in amazement at a pop-up book’s 2-d images. Now, it’s not that the idea is bad as much as it is Crystal’s arrogance that immediately cancels out any kudos she may have earned up to this point: I’m pretty sure the Taxi driver must be fiddling the meter to get some extra recompense after being forced to stomach the over-exuberant, rhetorical swill spraying from her gob.

To add insult to injury, she then states in her neutral pronunciation one of the crassest and socially-unacceptable derisions it is possible to aim at the hard-working Cabbie by saying “Onwards driver!”. This is quickly followed by the standard “I’m a PC and Windows 7 was my idea” and the end of the advert, but one can only hope that the Taxi driver slammed his brakes on as filming stopped, jumped out and tossed her into the gutter, smashing her laptop into a thousand Lego-sized plastic shards around her chagrin, bewildered form. As Crystal starts to rise from this assault, the Cabbie wheel spins off, spraying her with the road’s surface scum with his voice ringing in her ears “Try passing your test and buying a car if you want a f***ing driver!”. Let us all relish a little in her comeuppance and maybe, just maybe it’s enough for her to drop that accent and develop some regional colloquialisms to fit in more with the normal people she's trying to portray, eh?

During the 30-second runtime of this trio of anal lobotomies (that’s right, brain surgery performed through the rectum for maximum pain and suffering), the most offensive sections of these adverts are without doubt the “Re-enactment” scenes. For each character - Sophie, Ramin and Crystal plus the other miscreants in the current Windows 7’s campaign of dross - we get to see a flashback with an “actor” exploring the key moment the real-life “inventor” ingeniously arrives at their idea. The actors in question have a vague resemblance to the supposed inventors and we see them in stylised, soft-focus with neon teeth and complexions airbrushed into existence: it’s a sly dig at the world of fame and the exaggerated reality found within. Now, I’m all for post-irony within post-modernity but using actors to play real people who are really actors themselves but pretending to be real people just creates post-post irony, which is really just a jump backwards to pre-irony... er, rebadged and ... er... oh, bollocks...

See, that’s the problem with trying to be too clever for your own good and throwing a side-glance in the face of your reverential buying public, so perhaps big Bill and the Microsoft boys should hoist the ad-agency morons with their own petards and just get back to basics. Still though, we’ve got the above three examples of vacuous slop circling around in our media-savvy minds' eyes to contend with, so any new adverts arriving in the future will have a tagline that reads “I’m a PC and Windows 7 wasn’t my f***ing idea, so p**s off!”
Posted by Splosher