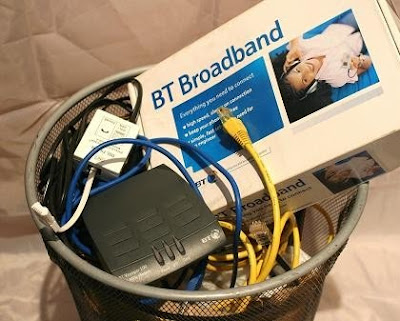 It is my great misfortune to live in an area within the UK that has never had fibre-optic cable piped beneath its streets during the great flurry of work which was undertaken many years ago to future-proof our communication infrastructure. With our insatiable appetite for technological wonders perpetually advancing and creating more complex design, the time has now arrived that we can truly utilise these pre-laid cables: spreading out as neural pathway tracts and connecting billions of silicon brains around the globe means blisteringly fast broadband connections for everyone, everywhere, all the time... except if your area never had the cable laid in the first place.

Now, if the option of cable cannot be taken, then that leaves just one feasible option at the moment for people like me and that is of course down a pre-existing telephone line, which will almost certainly mean an original British Telecom (BT) installation of some kind will have to be adopted. Obviously, we have the “New Kid on the Block” in the form of Mobile broadband via a dongle or 3G-enabled notebook, but this technology is in its infancy, so until the infrastructure is ironed out and reception spreads over the next couple of years there aren’t any other options available except the good old ‘phone line. It is via BT’s monopolisation of these pre-existing installations that people like myself rely on - some may say controlled by - their internet service and in turn are sadly left wanting more. Much like Oliver Twist, his outstretched hand trembling holding an empty bowl and stating in frightened defiance “Please Sir, I want some more!” to the board of Workhouse fat-cats, I find I’m shaking with fury whilst trying to explain my multiple problems to a moron down a telephone line and end up screaming “I want some more f**king speed!”

I’ve had to subscribe to BT Broadband for the last three and a half years due to my job and a need to communicate outside my four walls by writing drivel such as this, so if their service was all I had ever known and I was only using the internet for browsing, then I’m sure I’d be buoyed by the gentle lap of their ADSL coverage, unaware of any difference out there. However, the problem is I do know the difference as I’ve come to their insipid coverage from NTL cable, which of course was started via NYNEX, then Cable & Wireless and is now the Richard Branson-owned Virgin Broadband. The swap-over experience due to moving house was akin to one day drinking the sweet nectar of speedy surfing, the next being forced to swallow your piss via a couple of drips a minute much like a Chinese water-torture gone wrong... or right, depending on your view I suppose. Also, utilising a telephone line for the internet means that you are at the mercy of “peak-time usage”, which boils down to a more stagnated flow during set periods throughout each day.

All this means from the early morning hours through to around noon you’ve a better chance of downloading that film you want to watch from Torrents; from noon to about 5.00pm you'll notice the decrease in accepted traffic by repeated mouse clicks to enter sites and slow loading times; then from 5.00pm to midnight the real problems start with modem reboots in the hope of garnering a signal to just go from one web page to the next without the dreaded “Windows Explorer cannot display this page” message of doom flashing up. Only insomniacs, night-shift workers and crack addicts out there will benefit a little from BT Broadband at around 3.00am in the morning, when everyone else who are usually sucking the local exchange dry are tucked-up in the Land of Nod, so be prepared for the unbridled rush of 500Mbps and continual Virus attacks from Asian hackers.

My connection at the minute has gotten gradually worse from day one but has really developed a Boa-constricted flow since Christmas just gone. At first I thought I might have some malware lurking in the background or perhaps a worm had sneaked in via an unchecked download so turned to my Guardian Angels in the form of Malware Bytes and Avast! Pro, but their scans revealed nothing dodgy existing within my silicon netherworld. My next plan of attack has been to check my cabling within my flat and here I have found a couple of discrepancies: the CW1308 telephone lines are running three deep along the top of my skirting boards throughout and would probably stretch the circumference of the Earth’s equator when straightened out, hence the lower-quality signal. Then, I have three ‘phone points, with the master in my living room, the second in my bedroom and the third one bizarrely situated up high next to the roof in the kitchen. Finally, the BT master cable that runs into my flat can be pulled from its wall socket and appears as if it’s been stripped and pieced together by an illiterate Navvy or an educated Ape: either way, they’d both make similar mistakes when faced with a 4-wire, PVC jacketed twisted cable due to one being an overpaid cretin and the other being a under-developed primate.

So, we have a collection of potential indoor and outdoor problems that no doubt add up to creating the flow issues of my broadband’s connectivity, so through personal dogged determination and basic corrective measures I’ve managed to adjust a few of these constant irritations. I now have a connection which runs on a good day akin to a 56k dial-up modem circa 1998, albeit without the wonderful “traffic” noise, although to gain this speed I’ve got to unplug my telephone from the micro filter as using the ‘phone cuts off the signal. On a bad day, the whole experience feels like I’m back aged four playing with two empty tin cans connected by a length of string to make pretend walkie-talkies and I’m working my tin can furiously but there’s no-one else on the other end answering my feverish requests. Occasionally however, I have to endure a horrifically bad day’s surfing and this usually boils down to something resembling a flat-lined heart monitor: zero activity on a moribund line, only to be brought back to life with a fleeting blip once I’ve rebooted my modem. This performance may continue for 20 or 30 reboots in a row, by which time I’m risking a flat-lined heart of my own due to a barely-contained frenzy of spittle-sprayed, screamed expletives, smashed doors and near-hysterical weeping, all accompanied by a furiously trembling bottom lip.

BT’s feeble connection though is just one part of the complete and utter boiling rage they manage to induce within me on a daily basis; further examination of this dying British establishment reveals the obtuse disregard for their customers, adding insult to injury with their blasé attitude. I have spent hour upon hour - quite literally days in accumulated time - waiting on the end of my telephone listening to some poorly rendered, tinny music aurally assaulting my eardrums which is intermittently interrupted by a cold, automated female voice telling me that my call is important to them. Also, the caller is told in no uncertain terms that their call will be taped for training purposes, a sly play on the perception of our restrained British upbringing and our impeccable manners in order to negate a vocal flare-up. But these things are no longer relevant to our rapidly-changing society anymore, so I suspect BT have plenty of “training material”, complete with full-blown, expletive-laced abuse to further isolate their call-centre workers from the UK population through fear of instigating a mini explosion from somebody in Weston-Super-Mare over their download limit.

Anyway, this robotic-sounding bint lets me know if I wish to leave the call and get on with other things - such as killing myself possibly - then BT will call me back when there’s finally an operator available to personally interface with me and my very important call. Well, it’s something uttered along these lines but I can’t recall too clearly as having spent nearly an hour absorbing the electronic dirge of BT’s feminist Cyborg has rendered my thought processes catatonically impotent and reduced me to a gibbering slob about to implode. Also, the offer of a call-back may sound helpful and understanding but they’ll make you pay for the service, much like spending three months using 1471 to check who’s called you last and then discovering a bewildering additional sum added to your already immense quarterly bill, further allowing your burgeoning psychotic hatred towards this increasingly ineffectual company to run riot.

Finally your persistence may pay off and you might get lucky and be connected to a real-life, living Human Being at the other end of the ‘phone, who will then run a diagnostic test from 5000+ miles away and then tell you that there’s nothing wrong with your connection after all. Now here’s the irony regarding being told that it’s all in my head: I know about networking and the like due to having been an IT manager in my rich and varied past. So after waiting on a ‘phone whilst someone performs a set error check list, only to be told they can’t find anything wrong, time and time again, even though you’re virtually screaming the suspected issue down the line and your suggestions are ignored by the know-it-f**k-alls, you are left wondering what‘s the point in bothering at all? It may be quite possible to garner the same response and actions by talking to a wall of your own choice or perhaps speaking to a fence post could achieve a similar result, so I for one will be trying one of these options in the near future rather than waste anymore of my time speaking to headset-toting morons on the Indian sub-continent.

I’m now faced with a dilemma regarding the future of my internet connectivity as BT has really pissed on their chips as far as I’m concerned, so a thorough perusal of all available alternative options is now imperative for my salvation. Whether any other company can work wonders with a telephone line that has been in situ for nearly 30 years remains to be seen and hoping to go from a drinking straw trickle to a drainpipe flash-flood of internet flow is a little too good to be true but any increase over the current toss is welcome. Indeed, maybe it might be worth trying the old two tin cans and a bit of string concoction once again as I’m pretty sure they’ll do a better job at sending and receiving than anything you may have to rely upon from under the tainted facade of BT’s communication aegis.
Posted by Splosher