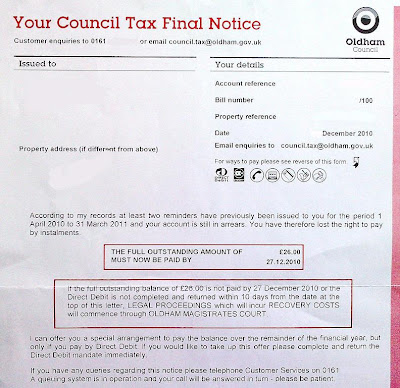 My previous blog entry regarding late Council Tax payment and the subsequent red letter threatening me with court - see "Council Tax blues" for more details - garnered me with a comment from ‘Oldham John’ (not his real name, methinks!) and even though I pay just £13 a month due to being employed part-time, this stalwart of the community dished up some choice words for me to ruminate over. I reprint his message below, verbatim:
“I think you need to get off your lazy arse and get a full time job….Paying £13 a month and you can’t keep up payments cut down on your Stella and START PAYING your Council Tax on time you cheeky get. The people who work in the Council are helpful and I have had no problems but I pay on time. They can ask for the money all up front but they are kind enough to let you pay monthly…Think yourself lucky they don’t ask you for the £130 all at once, but if you worked fulltime rather than sat on your arse writting hurtful mellitus articles then you would realise you are getting off lightly………Lazy C**T”
John
Resident of Oldham (I love my borough)
Now, I appreciate abuse at the best of times because it’s reaffirmation of p*ssing people off and means you’re actually achieving something in day-to-day life, rather than plodding along with the rest of the hive workers and accepting the routine of shovelled sh*t. I know I may be a little too long in the tooth for this pseudo rebellion but to receive the above indignant gibberish - complete with spelling mistakes of such brevity as ‘mellitus’ instead of malicious - warms me to my soul and stokes the embers of my own hatred to the point of firing new entry ideas, so the more numpty-heads who want to tell me I'm a dick the merrier!
Anyway, I paid my next Council Tax payment on time at the beginning of December, thankful that Oldham John had instigated a life-changing attitude within me: no longer would I just accept being a “Lazy C**T” (as he so elegantly phrased it) I thought to myself, I’ll ensure I f*cking adhere to it as a basic, governing principle in the future formulation my so-called life. Then just the other day, I received the above red letter from the Council Tax department of sh*ts, informing me my payment was late yet again and as such, I had now lost my right to pay my bill in instalments and must settle the overall amount in full.
Utter nut custard draining sacks of wastrel toss.
Straight onto the ‘phone and through to the relevant department, where the obligatory ten minute wait with a recorded voice and banal music was helping to poke and prod me into psychosis corner until thankfully, for the very first time ever, I received a decent person on the other end of the line. The lady in question explained the letter was an automated notice issued when more than two late payments came through on one person’s account, to which I countered that I’d paid on time and was holding the receipt in my hand as we were speaking.
So, we compared dates across the crackly ether and suddenly there was the discrepancy for both of us to see: I’d paid on the 30th of November at my local Post Office, but for some unknown, fate-is-tampering-with-my-balls-once-again reason, the payment hadn’t cleared for another week, hence the bastard crimson letter of cancellation I’d just received. The lady in question remedied the error as we spoke and apologised for the automated response system that had sent out the letter: she made it sound akin to something like the all-encompassing and self-aware military computer system Sky Net from the Terminator films, only with even more animosity towards shaved Apes who don’t pay their Council Tax on time.
And that’s that, really. I can still pay in installments thanks to this selfless woman at the Council Tax department or else I’d really be in the sh*t having to find the sum total of £26 before the 27th of December as the letter states or risk a Christmas courtroom drama. And please believe me when I say I’m not exaggerating this for comedic effect: I’m skint, full stop and the horror of the situation is that the Council would drag me to court and spend thousands in doing so, just so they can justifiably rape me of this pittance in order to balance their virtual books.
So many thanks to Oldham John for allowing me to realise that if things get a little too hard in the future, then there’s an escape waiting to be taken which I wasn’t aware of before his wonderfully constructed statement arrived in my inbox: just pack in my job, sit back on my arse and let the benefits pay my Council Tax because I’m just a “Lazy C**T” after all, aren’t I...?
Posted by Splosher