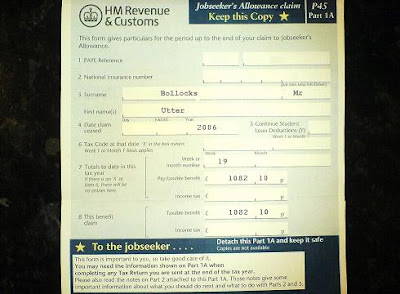 I knew it was coming and I can’t blame him for his decision, what with the state of the UK economy, the immediate VAT rise up to 20% and the fact he only sold £17.95 worth of stuff during the whole Christmas Eve to New Year Eve week. This ‘consumerist buying failure’ is really the reason he’s folding his online business as far as he’s concerned and who am I to blame him? I usually average takings of between £1000 to £1500 per week for his business and over four years, that’s bolstered his financial portfolio by an additional and very healthy £200,000, so to just sell a single pair of Golf gloves during this otherwise guaranteed dream week was too much to take.
I am not bitter about my severance because I’ve known for a while now that my time was coming to an end in the gainful employment of a Golf club (not exactly my bag, if I’m being truthful) but I can take away with me a sense of achievement and some salient facts: I’ve managed to clear most of my debts, I’ve saved a little bit of money from my weekly pittance and most importantly, I’ve grown to hate Golfers with even more of a passion than I did before I worked around them, so every cloud and that...
I now sit here thinking about what the future may hold and where I might find myself in a month’s time. Tossed out into the real world of the UK in January, 2011 where things are going to be harsh indeed: the Coalition Government’s Austerity cuts are about to hit virtually every household, vehicle fuels’ at an all-time high at the forecourt pumps and this country’s workforce are being laid off left, right and centre across our fractured society, which is now governed more than ever by the glaring dichotomy of the ‘Haves-and-Have-Not’s. Personally speaking, this is not the time to find oneself out of employment and any potential job position will be vied over by a multitude of desperate, wanton people who are stuck in similar circumstances as I now find myself in.
I still have hope though and fingers crossed, something will turn up in the near future that can utilise my many ‘Jack-of-all-trades’ multi-faceted genius: perhaps I can utilise my deft skills at taping up packed boxes or my uncanny ability at cleaning up items before selling them; so the world’s certainly my Oyster if I’m looking at doing warehouse work or being employed as a morning cleaner!
I only wish that these typed ramblings will be noticed in time and something - indeed anything - along the lines of writing for a living (which I used to do as a staff writer many Moons ago) can be implemented for my immediate future, but it’s long shot I know. What I dread more than anything is going to ‘Sign On’ at the Dole, as my abiding memory of the absolute morons who dwell within its office space have kept me in all manner of terrible jobs rather than put a claim-in with them. This dread is since I returned home from passing a Drama course nearly twenty years ago. Once there, I discovered myself and acted on-stage and in short films, I’d co-wrote a stage play that had been performed and also had poetry published: in short, I’d left a simple-minded cretin and returned an educated man of burgeoning intellect but without a job, so had to go to my local Job Centre for Unemployment Benefit.
I sat down and the woman behind the counter asked, “So, what have you been doing since you last claimed?” and so I told her all about my achievements in the world of Performing Arts, cycling through everything I’d undertaken over the last twelve months. I watched her nonplussed expression remain unchanged until I finished speaking and then, without moving anything but her eyes to her computer screen, the woman finally said, “Well, you were employed as a picker-packer in your last job, so I’ll bring up all the vacancies we have in that area... and remember, a failure to attend an interview we send you for will result in your benefits being stopped, okay?!”
I’m sh*tting myself, if truth be known but it’ll be alright, won’t it...?!
Posted by Splosher