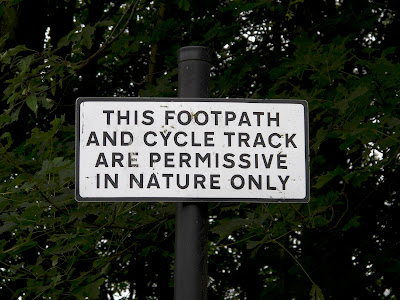 While out walking with my camera recently, I spotted the above sign. As my initial surprise wore off after reading it, I snapped a shot of it and then tried to decipher what the confusing message could possibly mean (indeed, Microsoft Word has immediately flagged its wording as being bad grammar):

“This footpath and cycle track are permissive in nature only"

The phrase used seemed to suggest some form of metaphysical concept in existentialism and would appear to accommodate an A Level student’s analytical dissection on the way to becoming a pain-in-the-arse University know-it-all. However, the sign was placed on the side of a footpath that runs across a public playing field, just before the entrance to a dank subway; the type of place that only gets sporty kids playing football, artistic kids spraying graffiti or feral kids out to mug drunken slobs. Not really the position to post bite-sized chunks of philosophical rhetoric now is it?!

Then of course, there’s the question regarding the actual area the sign has been erected within: the place in question is where I was born and raised, have left numerous times in the past and finally found myself returning back to a few years ago. It is a small town by the name of Royton, a largely working-class enclave situated in an Ice Age trough close to 700 feet above sea-level in the borough of Oldham, which lies some 8 miles north of Manchester City centre. Royton was established sometime prior to the 12th century and its name comes from the Old English word Ryeton, meaning ‘rye farm’ after the principle crop of the settlement at this time (indeed there’s mention of this place name as far back as the 7th century). As an established place of residence though, Royton first has an appearance in the history books when it’s mentioned in 1212 as a couple of farmsteads, but sometime afterwards a governing family by the name of De Byron (shortened to Byron later) built a manor house and presided over the growing estate for close to 350 years.

The farms’ grew in size to a township and one John Byron was knighted in 1571 by Queen Elizabeth l herself for gallant action in the invasion of the Spanish Armada, during which time he brought denizens of Royton to fight in this very battle. This royal connection continues to the English Civil War and patrons from Royton performed their duty in battle on the side of King Charles l’s Cavaliers against Cromwell’s Roundheads under yet another John Byron, who was made 1st Baron for his support and allegiance to the Crown. Ultimately though, Cromwell was victorious and the Byron manor house was confiscated from the family; subsequently the property was sold to a linen merchant by the name of Percival, whose family lived there until the early 19th century before it changed hands again and was finally named Royton Hall by a family named Radcliffe. The Hall itself is long gone now and following an archaeological dig back in 2005, only the foundations remain as a reminder of Royton’s contribution to the development of modern-day Britain through its varied history.

Royton was also a key player in the Industrial Revolution because of its demographic placment (or perhaps due to the linen merchant Percival's influence) and when the production of cotton into usable textiles began in earnest during the 18th century, this small hamlet is renowned as the place where the very first powered cotton mill was built. This water-driven construction was erected at Thorp Clough in 1764 and was aptly named “Thorp mill” in recognition of its location, although nothing now remains of this true original except a few half-bricks that occasionally turn up when foundations are being dug. The actual stream that powered the water wheel at the mill is the River Irk - which originates from a tiny spring in the Royton locale of Cowlishaw - and ends up as a major tributary of the River Irwell, the main arterial waterway of Manchester’s Ship Canal and the one of the reasons the textile industry in the whole area flourished.

At the height of cotton production in the mid-19th century, Royton had developed into a ‘mill town’ with 44 full-sized, multi-floored cotton-producing mills across its area and along with neighbouring Oldham, was responsible for 13% of the whole world’s cotton production. This continued steadily right until the Conservative Party’s victory in the 1979 General Election: from that point onwards, the perpetual decline in the area’s most prolific employer was unavoidable and Shiloh - a name synonymous with cotton manufacturing the world over - began to sense the growing change not only in Government commitment, but also in global Capitalism’s free-market ethos and job opportunities began to disappear.

By the mid-1990s, most of the cotton mills in Royton and the surrounding Oldham area had been closed due to the outsourcing of production to cheaper countries, where an employer’s pound garnered so much more. The now-empty red-brick behemoths and their towering chimneys were either knocked down in spectacular fashion by the famous demolitions expert Fred Dibnah for new-build houses to sprout up or left to crumble into lumbering wrecks that blocked out the sun on the terraced streets below as the wind howled through the windowless floors all day long. Indeed, could there have been a more apt description than by William Blake in his opus Jerusalem, with the delivery of the line, “Among these dark satanic mills?” to allow the imagination run riot. (Even if this is not a direct reference to the Industrial Revolution’s effect on the country and is just a nod to the towering grit stone formations of the Pennines, how precedent the poet’s words are when mentioning the cotton industry of Lancashire!)

There are other events and places throughout Royton’s history, but due to time and space restrictions can only be given cursory mention:

• Two train crashes at the long-closed Royton Station, the first in 1908 resulted in one fatality and the second in 1961 destroyed houses and resulted in Royton Railway station being closed for good in 1966. The only reminders that Royton had a train line connection are the nature walk under the remaining bridges and a local pub called The Railway where the crash is supposed to have occurred;

• Tandle Hill - its War Monument standing tall, as shown here - stands at a height of 509 feet and was used as a training place for radicals during the 19th century in the build-up to what was to become known as ‘The Peterloo Massacre’ at St Peter’s Field in Manchester, 1819. As a direct result of this, Beech trees were planted there to disrupt any future organisations, hence the reason the people of Royton and the surrounding boroughs now can enjoy the 100 acre Tandle Hill Country Park, established in 1971;

• Royton library - which is attached to Royton Town Hall, its clock tower’s bronze dome now green through oxidisation, as shown here - was built by monies donated to the town in 1907 by the American philanthropist Andrew Carnegie and as such is designated as a ‘Carnegie Library’, one of 660 constructed throughout the whole of the UK;

• Finally, Sir Winston Churchill, the greatest exponent of the “British Bulldog spirit” was the Member of Parliament for Royton (under the extended aegis of Oldham parliamentary borough constituency) between the years 1900 to 1906 and we all know where his subsequent leadership lead the country...

So, my place of birth and current residence is a small English town called Royton. It is a town that managed to forge ties not only with the very highest echelons of Royalty and reap the benefits of allegiance, but was also a strategic player in changing the world via the Industrial Revolution boom that happened on its borders. It is a town with over 800 years of history lying just beneath its post-modern facade, a minor constituency adjacent to the Pennines that has played a major part in forming the country we consider to be one of the most liberal, tolerant and multicultural places to live in the world. In returning to Blake’s Jerusalem for a final time, can there be any doubt that Royton has played an integral role in forming “...England’s green and pleasant land”?

What does this history lesson have to do with a sign embossed with pretentious nonsense, you may ask? Us Roytonians are hard-working, no-nonsense people who don’t really worry ourselves over life’s little intricacies, as a place in our country’s history ensures a quiet confidence, so my question is simply this: which pen-pushing slop merchant at our local Council offices decided it would be a good idea to waste our hard-earned monies on creating these indecipherable f**king signs of conceited s**t in the first place, eh?!

Just an opinion, that’s all...


(All information regarding Royton and its history has either come from word of mouth, knowledge attained via family or Wikipedia, so if anything’s wrong there’s three sources to place blame upon!)