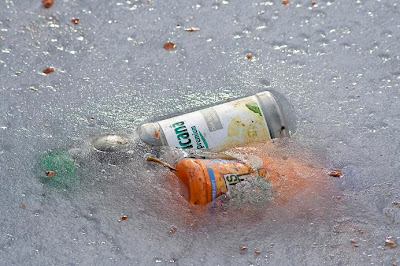 So, for the first time in ages we have ourselves a White(out) Christmas, enjoyed by kids everywhere with their Snowmen and hated by virtually everyone else who have to get to a job in order to pay bills, feed themselves and heat their abodes. As we’ve been taken by surprise by the severity of the freezing conditions, all local councils have come to a complete stop, unable to get out to grit the roads of their boroughs due to two problems: firstly, the majority of their vehicles are unable to cope with the icy conditions and secondly, this is exaggerated due to the fact said vehicles haven’t been able to grit the roads, hence perpetuating this frosty problem. The Council gritters who have managed to get out and toss their rock-salty spray across our roads have then found themselves running into a third problem; the allocated grit mountains back at their depots are running out prematurely because of a miscalculation in supply and demand due to - yes, you’ve guessed it - “Global Warming”.

In this situation, all that has happened is that we’ve all developed a wide-spread societal shock for the first couple of days, which we then had to face head-on and convince ourselves to plough through the psychological snow barrier in order to continue with life. I know this sounds melodramatic but the fact is we have all become so used to the mild winters we regularly get each year that this swamping of the white stuff really knocked the stuffing from us. So, it was a case of head down and hood up against the onslaught and trudge on through until the snow and ice passed on, which it did in most parts during the week between Christmas and New Year and then we can all get on with playing catch up for the lost snowy week or so.

How wrong we were. With only a single day received of relatively ice-free pavements, a Siberian cold snap rampaged into our lives just before New Year’s Eve and we have now - two weeks on and counting - ended up trying desperately to survive in a world resembling the plot of The Day after Tomorrow, even though we all laughed at its premise when it premiered. We’ve found ourselves in for the long haul; calling on the long-forgotten “Stiff-Upper Lip” mentality we have gradually cast aside after the collapse of an Empire to see us through the cold, dark nights and frozen, slippery mornings. Against this background of snowed-in isolation and dwindling supplies, it’s amazing how quickly we can begin to appreciate that out-of-date bag of partly-sprouting potatoes in the bottom of the cupboard or the recycled tea-bags which are now rotated through again and again as we’ve devoured everything else that is edible or drinkable. If our imposition carries on much longer, then let’s just say there will be a lot less cat and dog food being bought come the thaw as Tiddles and Rex will have warmed their owners’ bellies up, literally.

Talking of animals, in weather like this when it’s hard enough for multi-tasking, intelligent Mammals like ourselves to survive, a few pieces of bread will make the difference of life or death in the lives of many of our feathered friends, the birds. This task I was undertaking the other day, utilising some left-over stale baguette that I was throwing out of my front window, when I became aware of a knocking on my front door. Opening it, I was greeted with my neighbour from the ground floor who then proceeded to ask me to stop throwing bread out of the window to the starving birds; when I asked why I was simply told in no uncertain terms that he and his wife were - and I’m paraphrasing here - “Sick and bleeding tired of getting bird shit on our windows!” Well, I tried to explain how there was a little Robin in the bushes facing our windows and the crumbs were intended for him, to which I received another monosyllabic utterance along the lines of “I don’t give a toss about any bloody bird! Stop throwing bread or I’m putting in a complaint!” So much for the season of good will, eh?

This neighbour epitomised the complete lack of personal humanity which should be prevalent at this time of year and he came across as an update of Charles Dickens’ Ebenezer Scrooge, the main character from A Christmas Carol and our meeting got me thinking further. Perhaps there could be a new rendition of the story for the post-modern age we live in: called “A Christmas Carol 2: now it’s serious!”, we get to see how the shine is taken off Mr. Scrooge’s fresh new apple of acceptance and trust when a street urchin tosses a snowball at him that has a stone in it, leaving him dazed and confused. Once he’s regained his composure, the old attitude returns with even more spitefulness and Scrooge then proceeds to destroy everyone’s Christmas, relishing in the pain and humiliation he gets to deal out during the so-called festive season. When the three ghosts of Christmas past re-appear and try to talk sense into him, Scrooge just tells them to “Go f**k yourselves you misty pricks!” then proceeds to scoff as much Christmas dinner as he can take before feeling full. Once he’s had his fill, Scrooge then carries the leftovers outside, drops his pants and defecates across all the remaining food before the many eyes of the starving, laughing uncontrollably as he sprays his loosened bowels everywhere. When asked why he would such a thing rather than feed the poor, Scrooge just answers “Bah-humbug, mother f***er!” and wanders off lost in his own world, counting down the days until his next Christmas arrives and he can enjoy himself as much once again. It might need some work but damn, the new Ebenezer’s a man after my own heart...

Well, back to reality and as for travelling this appeared to out of the question for most people who didn’t have a four-wheel drive behemoth and even those that did possess such a monster couldn’t guarantee complete control through the man-sized drifts and glass-like sheets of ice. For the rest of us mere vehicular mortals, frozen starter motors and gelatinous diesel awaited and for the ones who actually got moving, well they soon wished they hadn’t bothered: if unlucky, they had a gliding bump into a hidden curb, railings or worst, another car and if they got lucky, then they just had to dump their car miles from home when it got trapped in the ice and hike to their destination.

One of the most incredible sights to behold through all this winter wonderland period is not Nature’s power to disrupt the highest in the food chain’s lifestyle but the generation of children who have never seen the old-school snowdrifts first-hand before and thus do not understand how to dress for minus-zero occasions. Walking behind a young teenage lad who is wearing canvas plimsolls, drainpipe, stretch-denim jeans and just an Emo haircut as head protection instead of a woolly hat brings a sigh of disbelief and a shake of the head in order to try and comprehend where his thought process has come from for that attire. It’s even more eye-opening when you spot a girl of a similar age as I did the other day during a hard-fought trek to the garage to buy some tea bags, an essential journey in harsh, blizzard conditions akin to the North Pole dropping in on Manchester. As I battled to garner a foothold in the frozen slush beneath my hiking boots and turned my face away from the Arctic wind buffeting my hood, peering through squinted eyes into the swirling snowflakes I spotted an approaching figure.

As it got closer, I watched in amazement as this young girl, no older than thirteen or fourteen years old, wandered past me seemingly oblivious to the encroaching elements surrounding us, chatting away and laughing into her mobile ‘phone. All credit to her for being able to hold a conversation in force 10 gales, but what caught my attention was what she was wearing: on her feet she had a pair of multi-coloured Wellington boots, a pair of jeans and a T-shirt, with no sign of a hat or gloves to be seen anywhere on her person! To top of this incredulous sight, she appeared to have styled her long hair, which was now blowing all over the place and whipping its mousse-encrusted tendrils in her vicinity, giving the appearance of her having Medusa’s snakes as her follicles. All I could do was continue onwards, smiling and laughing to myself safe in the knowledge that in another twenty-odd years, this person’s generation would be at the helm of running our country, so God help us all.

With a majority of people slip-sliding away and going down head over heels, breaking arms, legs and arse-bones left, right and centre, there’s not much humour to find in this protracted snowfall situation. However, I’m pretty sure if you see someone getting “Ice-flow horizontal” next to you in the street, then I’ll bet trying to contain your laughter in the face of a prostrated person making an unintentional snow angel will be pretty hard, especially if they’re emitting moans and groans of differing severity. Even if you’re close enough to go to their assistance and help them to find their footing before you take your leave, you’ll find that a sore inner lip or cheek with teeth marks will be your payment for not laughing in the face of painful hilarity.

So, that’s the gist of the abnormal, wintry weather really: plenty of mayhem with some injury, a little mechanical failure at inopportune times, unbelievable neighbourly selfishness and baffling amazement at the numptiness of modern-day kids. If the big freeze continues much longer, I’m sure society will collapse: we’ll all end up turning into cannibals and then it’ll be survival of the fittest, fighting one another for either a tin of beans or someone’s brains, all in the space of just a cold couple of weeks over Christmas and New Year. Let’s just hope in the near-future we don’t have something really serious happen like an asteroid strike, a nuclear detonation or the second-coming of Christ because we’ll be truly buggered if an entire country has ground to a halt over a couple of inches of iced-flakes.
Posted by Splosher