Cheap adverts and the death of TV 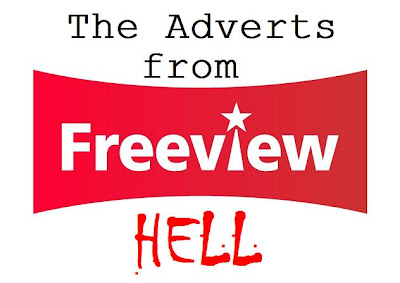 With the cancellation of the old analogue terrestrial signal across the UK and the advent of the new digital “Nought and Ones” signal, we as viewers are now flooded with a bewildering amount of new channels being beamed directly into our homes via various set-top boxes and televisions, either through electron-accelerated CRT tubes, plasma, LCD or even LED screens. These extra channels all look good on paper and their selling points are more choice for the consumer plus freedom to pick and choose our own favourite programs to create a weekly personal playlist we then follow religiously. Ironically, the problem with all this variety stems from the programs’ origins: it’s cost-effective to produce or even just to repeat away from the original channel and so we find ourselves being swamped by a mediocre pyroclastic flow of stale, episodic releases.

The TV channels in question - such as Dave, Eden, Yesterday and Alibi to name but a few - now have to find a revenue to keep broadcasting all those repeats and so enter the living Hell that the viewers now find themselves dipped into for prolonged periods of their watching time: cheap adverts in extended slots. Indeed, some programmes are actually trimmed in order to cram in more of these slop-sculptured bowel movements, which have been lovingly scooped up and patted into little 30 second flecks of media crap by advertisers. So, not only are we being attacked visually by these crafted turds, we’re also having to pay for the privilege due to our favourite shows missing chunks in order to accommodate more vacuous advertisement garbage. Needless to say, the powers that be expect us all to accept these broadcasting constraints without raising a solitary voice in opposition, much like a zombified Proletariat unswervingly dwelling under a Socialist “Big Brother” regime... er, hang on...

There is a whole gamut of low-cost, cheap advertising atrocities to be found within the world of the new digital channels but what we have here are the most appalling due to their cheapness and the old adage “you get what you pay for” can literally be taken at face value in this respect. Indeed, there are some examples that are almost akin to having been completed for the cost of small child’s accumulated pennies from their piggy bank after a year’s saving and probably have a price tag of £9.99 all in.

Of course we have the usual dross, such as Confused-dot-com’s “ordinary people” viral campaign, which appears to be inexpensively made and filmed on a 0.3mp VGA mobile ‘phone camera, but truth be told probably cost about a million pounds and is not only let down but destroyed due to the cretins who are “acting” in this epilepsy-inducing, gibbering stream of consciousness bag of effluence. Then there is Go Compare, another insurance company’s attempt at creating a memorable, viewer-friendly advert complete with a funny figurehead and catchy ditty: however, having a fat, sweaty opera singer warble to the point that your intended customers’ automatically reach for their remotes to change channels means you’ve only managed to achieve an utter compulsive hatred for your own product. Finally we get JML’s thought-sapping additions thrown into the mix; whether it’s a multi-useable scarf that’ll make the wearer appear insane or the colour-changing alarm clock which will end up smashed into a million pieces after one strobe-emitting ring, they all coast along on the crest of a narrator’s voice that sounds as if God himself has gargled out the words. These examples are still a rung above the real offenders though; just elevated highly enough off the thin crust of feckless sludge that lies in the bottom scrapings of the advertising barrel, so here are three of the worst toss-discharges in digital TV land at the current time for your appraisal.

First up we have We Buy Any Car Dot Com, an advert so inanely annoying and emotionally crippling that there must be an automatic safety-switch hardwired into the human brain to bypass pure, unbridled horror as I cannot recall consuming its entire soul-sapping insidiousness. Whoever has made this - and for all we know it could have just spontaneously appeared in our realm from another dimension where an incessant din is seen as the zenith of existence - they have obviously tried to copy the perceived success of the Crazy Frog and its hateful electronic beats by including a repetitive, looping mantra along with a simple animation to sell their product. Over its 30 second runtime, this advert repeats the following phrase in the hope of luring you into trading-in your vehicle for cash: “We buy any car dot com, we buy any car dot com, we buy any car dot com, we buy any car dot com” (infinitely repeat). Even though your life will continue after the images of the Flash-designed cars travelling along a road dissipate from your mind’s eye, you’ll find the aural, hard house-beat assault of its tune bouncing about between your ears and reverberating inside your skull like a perpetual game of Pong. Now indoctrinated by this subliminal drivel, you’ll find that each time you pass a car showroom an impulse will seize you and you’ll try to sell your car without knowing why, staggering from one confused salesman to another like a stage hypnotist’s forgotten onion-eater.

If flagellation and self-loathing is the key to guarantee success in advertising via selling your soul, then all you media-types should take notice of this prime example; start flaying your hated skin from your bones now in anticipation of signing Lucifer’s contract with your own mushed epidermis in order to attain the dizzying heights of We Buy Any Car Dot Com’s lofty apex.
”

Next up we have another bucket of pig swill in the form of the bright, shiny and happy Mazuma Mobile, an advert so joyously fickle that no matter how good you feel before watching it, you’ll be suicidal once it finishes. We are introduced to a vacuous, Primark-fixated twat with a surgically-enhanced grin much like The Joker’s, who has just bought a new mobile ‘phone and now has to decide what to do with her previous mobile, which is now sobbing its little silicon eyes out. Yes, both ‘phones have sprung to life in cartoon CGI representations - orange for her sad old one and blue for her shiny new one - as she begins to callously pull out a self-addressed envelope before the tear-stained keypad of her poor, hysterical former best friend. Suddenly though, the little orange ‘phone peps up when it realises it’s off to Mazuma Mobile and now wearing a big smile, hops into the open envelope which is held apart by the facially-distorted, callous wench who doesn’t care how much she gets for her once faithful little telecommunication accessory just as long as it pisses off right sharpish. She can now lavish some time on her latest acquisition and wait for her cheque from Mazuma Mobile for the already-forgotten little orange ‘phone, which’ll be broken up and melted down for all the precious metals inside it whilst her f**king grin will still be threatening to envelop her face.

There’s only one message from Mazuma Mobile’s fun-packed, colourfully life-affirming advert and it's this: think about YOURSELF, don’t worry about ANYBODY else, drop EVERYONE who can’t keep up and keep smiling while you think about the MONEY! It is a sad reflection and aptly symbolic for the grasping, greed-saturated society we all live in and certainly warms your cockles with the knowledge that if World War lll ever breaks out, it will be people like this pathetic individual who’ll be expected to find the courage to fight the good fight, so perhaps we should just dig our graves now, eh?

Finally, we have the real nadir of bargain-basement adverts in the form of Car Spotter Registration Checker, which involves a pair of cringe-inducing, prostate-slackening televisual feasts that could only reside in the realm of digital TV, much like a dormant contagion ready to infect if only it was allowed out into the population. The first one introduces a completely spoilt moron who we find sitting inside a Mini on a garage forecourt, rocking back and forth as if she’s gripped by a seizure and declaring repeatedly “I love it! Can I have it? I love it! Can I have it?” to her incredulous boyfriend. He then utters some dross through his scrunched-up face regarding the incredible good fortune that Car Spotter Registration Checker can offer them via their automated text service. So with mobile in hand, he fires one off as quickly as relieving himself first thing in the morning after having his sexual advances rejected by the Mini-obsessed tool for the third month in a row. Their lives together must be horrendously impotent and materialistically driven, with each new utterance that escapes their open gobs cancelling out their previous banal rhetoric so they just communicate via text messages for the rest of their crumbling relationship, even if seated in the same room.

The second one shows someone who resembles an over-the-hill rock roadie checking out a Volvo which is parked up on a street with a “For Sale” sign in the window: as he bends down to look inside the car, it appears as if he’s about to lob a half-brick through the window and have away with the stereo to sell in the pub for a couple of pints of Cider. But wait, how wrong we are in our mistrusting judgement of Gypsy-looking types because he’s just looking to buy the thing after all! We are then informed with the not-too-subtle use of voiceover - “How does that text evaluation work again?!” might turn out to be a classic RADA audition speech in the near future for this generation - that Car Spotter Registration Checker is all you need for peace of mind when checking over a dodgy-looking vehicle that has a price a little too good to be true. I’m sure that within the next five minutes, the Police turned up and had him spread-eagled across their bonnets, frisking him with authority thanks to some middle-class curtain twitchier who felt that this long-haired yobbo was up to no good peering into Mr and Mrs Fenton’s car.

With these three instances of entry-level, penny-pinching, continuity-linked creations we can rest easy in the knowledge that the mucking out of Cow sheds across the country is not going to waste and all the accumulated, watery excrement can be seen in daily rotation during the airing of our favourite shows. So, we now have all the proof we need regarding the saying “You don’t get anything for free” and there’s no doubt it rings true when faced with new TV choices: we may have Free View with its many digital channels to peruse at our fingers’ desire but the trade-off is our viewing pleasure is ruined by cheap adverting. If you’re between the ages of 5 and 25, then the continually obtrusive interjections of these unfathomable media ruminations probably won’t even register in your hollowed-out, attention-deficient craniums and perhaps these cut-price adverts are perceived as works of post-ironic art. However, if you’re older, wiser and have grown up with a staple of TV channels that could be counted on one hand and where you only got a quick advert breaks every 20 minutes, then I’m sure you’ll realise this adage fits perfectly when describing all the above examples: if it looks like shit and sounds like shit, then it probably means it is shit after all...
Posted by Splosher