Dreams of what lie beneath 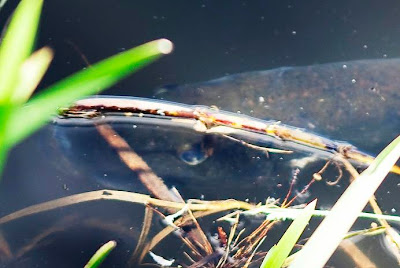 My breath started getting faster and shallower with each step further from safety. My shaking hands started to bleed as the tight wrapped wire cut into them through my mounting fear. The soles of my boots began to slip on algae growing beneath the water on top of the weir’s steel grate.

A fall to the left meant a tumble to my death hundreds of feet below and a fall to my right meant being torn to shreds by a shoal of enormous Eels.
I felt myself freezing up. My joints began seizing halfway across the torturous trek along the top of the dam. Drips of blood from my cut hands fell into the water. But I was going to make it.

The other side beckoned me but with each shuffled step, everything slowed to an agonising crawl. A blinding light enveloped my sight. My heart beat filled my hearing completely.

I was clammy, out of breath and had to double-check under my bed to make sure there were no huge serpentine fish slithering around beneath.

There’s no need for me to start analysing this dream and its many meanings as I’m fairly sure the subtexts are blatantly obvious, but below are just a few of the major points that have baffled me during my waking hours:

• An odious ex-girlfriend interfering in my present life - albeit in my imagination - and regardless of whether she was trying to save my life or not (I’d rather have been f**king eaten by the giant ‘Black Wangers’!);

• The amalgam of murky water and shadowy fish shapes that morphed into terrifying Eels, all squirming just below the surface as they sought to snaffle me;

• I’d failed to complete my “Quest” due to waking up and so was unable to overcome the metaphorical peril that crossing the dam wall’s weir represented in my every day, waking life.

One thing is for certain and that’s I’d like to share this vivid experience in the hope other people can relate to my almost psychedelic, night-time hallucination and perhaps find some common ground within their own flight of fancy. However, I’m pretty sure I’m going to be on my own regarding the obscure theme of avoiding ravenous Conger assassins from the depths of the deep; if I’m not alone in dreaming of this bizarre theme by any chance, then thank God I’m not the only f**k-up walking this Earth!
Posted by Splosher