A slip of the tongue 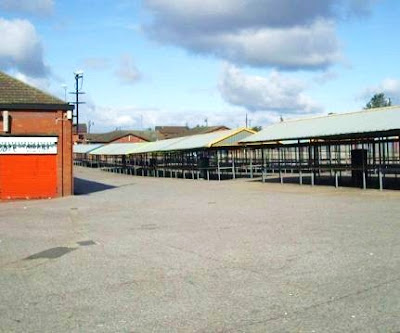 Early one Sunday morning the other week, while out and about looking for some potential bargains on a car boot sale, I happened upon a three-way heated debate involving a husband and wife stallholder team and a prospective male buyer who’d somehow caused the growing vocal catalyst me and many others were now stood around listening to. The wife was short, fat and incensed, the husband was big, fat and incredulous and the poor bloke appeared humiliated, dazed and confused with all this unintended attention aimed at him and was defensively trying to calm the situation down.
Bloke: (shaking his head) Right, I’m sorry for that, I didn’t mean it like that -
Wife: (butting in) Then, as he held it up he said, “How much do you want for this, eh?”
At this, the wife picks up a toy figure from on top of all their car boot stuff laid out on the stall’s surface and waves it around for emphasis.
Husband: (glancing back and forth from his wife to the bloke) Did he...?! He did that?!
Wife: (becoming more and more zealous) Yeah, he did and then when I said about two quid, he tossed it aside and said, “No f**king chance”!
Bloke: (his embarrassment growing as each new viewer arrives) Er, look let’s forget it now and -
Husband: (seeming to grow another couple of inches through rage) He said f**king what!? You said what to my wife?!
The husband moved a step closer to the bloke, fronting him up and at this, the bloke took a step back with his hands raised.
Wife: That’s what he said and when I asked him what he meant, he said, “I’m not giving you two quid for sh*t like that”!
Husband: “Sh*t like that”?! You calling my kids’ stuff sh*t, mate?! My kids’ stuff not good enough for you, is that it?!
With this, the husband waved his outstretched arm across the pile of used tat stacked up on the market stall.
Bloke: Er, no I just meant why are you selling it if it’s not wanted, that’s all -
Husband: I think you’re talking sh*t myself, buddy -
The husband took another step towards the bloke, who attempted to retreat again but bumped his back against a wall of people now watching this debacle unfold.
Wife: (cutting in) You think that’s bad?! I told him to put the stuff down and leave and do you know what he said to me then...?
Husband: (barely containing his furious anger) No, what did he say then...?
Bloke: (realising the error of his ways at the imminent thrashing he was about to receive) Listen now, we all make mistakes, don’t we -
Wife: The cheeky bastard said, “I’m just looking, you fat c*nt”!
Husband: “You fat c*nt”...?!
There was an audible intake of breath from the throng of people observing this unfold and much like mammals everywhere, our curiosity wouldn’t allow us to look away from the inevitable kill that was about to be delivered unto this foolish man. Time seemed to stop: the bloke was backed up with his hands raised, the wife was glaring at her husband for retribution and her husband was frozen in an attack stance wearing a fearful grimace. Then, the husband's mouth cracked a crooked smile.
Husband: (slowly turning to his wife and shrugging his shoulders) He’s got you there, hasn’t he...?
Wife: (flabbergasted) What...! WHAT DID YOU SAY?!
Husband: Well, you are a fat c*nt, aren’t you...?! I mean, I love you but I can’t batter someone senseless for speaking the truth -
Wife: (flying at her husband) YOU F**KING EVIL BASTARD!!!
In the following marital implosion, the cornered bloke quickly made his escape and disappeared into the assembled masses, who then gradually dispersed through disinterest when they realised there would be no male-on-male Gladiatorial bloodletting, just a husband and wife argument. As most of us have to live with these Matriarchal/Patriarchal clashes every other day, there was no point in wasting valuable bargain-hunting time over our own foreseeable futures, was there?
Posted by Splosher