Between a rock and an unemployed hard place 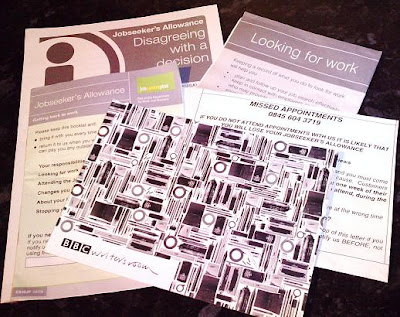 It’s official: I’ve been unemployed for the last three weeks and so far, things are looking very bleak indeed on the job front, as most people will realise in the current economic climate of the UK. So I’ve had to endure the whole new claim for Job Seekers benefit debacle that one must undergo when tossed onto the heap of uselessness, which is much like a dumped dog that its owners don’t want any part of anymore, hanging around for scraps. Yes, that’s my role now in society: I’m a shit-heel mutt, scurrying about for handouts, losing its hair through stress and feeling outside normality...


Can there be an upside to this dilemma, I hear you ask? Well, yes of course; I’ve always believed there’s a glint of hope in the deepest of shit if you’re only willing to hold your breath and dig to find it. However, in my case, today as we approach the end of February 2011, the shit’s a bit deeper than I expected, so it may need breathing apparatus, flippers and goggles to discover anything decent in its murk.
My first signing-on day at my local Job Centre was an eye-opener: it just resembled a cattle market consisting of a multitude of cretins (myself included) all lounging around, awaiting their individual names being called out for their 15 minutes of infamy. After being in work for the last four and a half years, the whole unemployment system - which I’d become adept and adroit at (ab)using prior to my job - has changed in all recognition. Not only are there too many people to process due to the whole recession ‘Oh crap, there goes my business’ situation, there aren’t any jobs to force people into anyway!
So, it was just a case of jotting down with a biro some banal - and mostly made-up - job titles I’ve applied for in the two week interim since I first place my neck on the Dole chopping block. Then, in utilising classic misdirection, I put on a face like a slapped arse and regurgitating slop such as, “God, I can’t believe how bad the job market is!” when asked what I’d done with my crushed soul during the week to find employment. And you know what? My sleight of hand seemed to work, but this may be only due to the fact I’ve only begun my claim, because speaking to other people, I’ve seen a glimpse of my future...
One lad I know has been unemployed for the last 18 months due to an industrial injury, which basically entailed him falling twenty feet onto concrete from racking: this meant the he broke both his fibula and tibia at the ankle, resulting in five fractures and the shattered shards coming through his skin. Now, he still walks with a cane and is unable to stand for any length of time, but the sick have decided the poor bastard’s fit for work and kicked him off to Job Seekers; a place you really do not want to find yourself if you’re currently lumbered with a walking stick!
He’s been applying for jobs constantly - partly to do with a need to find work but mostly down to the Dole insisting he take anything on offer, regardless of common sense - so all credit to the lad for being driven, but this stubbornness is to no avail. As soon as a prospective employer takes one look at his walking stick, their eyes glaze over and he’s immediately lost any chance of being their employee of the month.
How many job positions has he applied for in the last six months?
Try around 250 application forms, CVs and general email inquiries as a round figure.
How many interviews has he garnered?
Five. Yep, just five interviews from all that work.
How many jobs has he got from the five interviews?
Not a single one. Talk about crippling demoralisation or what?!
As for me, I’m not bothered at the minute about not working as my previous blog entry from a month ago goes some length to explain, hence the large gap in writing on here. I’ve managed to rediscover my script writing after a 15 year hiatus: in just six weeks, I have managed to finish two spec scripts - one 68 pages, the other 32 pages - which are now at the BBC Writers Room; also I’m currently 52 pages into a third spec script and this should be finished by middle of this coming week.
Now, I could wander into the Job Centre and tell them all about how I’m back writing scripts and I’ve got some at the BBC for perusal, but I’d just look a complete f’kin moron, plain and simple. I happened to make the mistake of mentioning this blog to the woman who originally interviewed me for my ‘Back to Work’ Job Seekers claim, in conjunction with my intended employment searches. I was met with a gaze into the brain of numpty-headed idiocy, so I proceeded with caution:
‘Well, the thing is, I used to be employed as a staff writer on magazines and I’ve been commissioned for freelance journalist work in my past, plus I have over two hundred and fifty pages of intelligently written critiques on my blog... ’ I said into the blankness of her soulless face.
A smirk broke across her lips. ‘Yes, probably best to forget about your little hobby and look for a real job, okay?’ she said with burgeoning glee. She tapped her keyboard and turned the LCD screen to face me, pointing to a line halfway down the display. ‘Now, here’s a position perfect for you - warehouse worker wanted, nights...’ sprayed from her venomous trap, trying to poison the very air around me.
‘And remember, If you do not attend an interview we’ve set up, you could have you benefits suspended for 26 weeks,’ she released my way through her cracked facade of utter hatred, the words hanging in the air with her previous spat toxins.
Ah well, wish me luck in my future script writing endeavours and fingers crossed that I can hold off twats like her for the sake of my sanity, my soul and ultimately my f’kin life!
Posted by Splosher