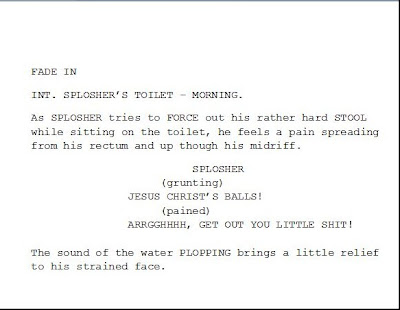 Well, I appear to have had a two week hiatus from writing utter dross for this blog and all because I’ve been typing more and more of my nonsensical slop into an half an hour TV script in the fingers-crossed hope of breaking out of my monotonous, poverty-stricken, soon-to-be-unemployed existence. I’d originally written the synopsis and ten pages this time last year, but what with life and its tendency to fling handfuls of cooling shit upon me, I’d never found the time to progress beyond the basic outline, until now.
Anyway, over the last four weeks, I’ve donned my screenplay writing hat and dived into the prose minefield that is the spec script format: each pages’ margins set to the correct depth, all things of importance stamped out in CAPITALS and slug lines continually reminding me - and any potential readers - whether the action’s indoors or outdoors and the f**king time it’s happening! Also, even though I’ve got the wonderful Final Draft 8 at hand, I’ve foolishly carried on writing in Microsoft Word 2007 as this is the program the original few pages were put down in, thus resulting in numerous uneven tab presses, multiple ‘Sticky Keys’ pop-ups and mysteriously lost save points.
With perseverance though, I’ve managed over the last month to extend the content of what was basically just the shape of an idea to 94 typed pages of soul-sucked goodness. Now, throw out of your mind the image of Jack Nicholson typing reams of paper with just the phrase, “All work and no play make Jack a dull boy” repeated on each page as in The Shining (dir. Stanley Kubrick, 1980) because I've actually ended up with a semblance of a screenplay. The problem is though I've finished with 60 more pages than I can submit for a thirty minute sitcom, thus meaning I’ve had to perform the most painful hatchet job yet in my brief literary career!
The truth be told, I’ve actually managed over the last couple of days to grind everything down I’ve written thus far - from a subtle tense tweaking of a choice phrase to just highlighting a couple of pages and pressing the delete key - and at the minute I’m looking at 55 cram-packed pages of such outstanding brilliance that I’d rather lose one of my balls than cast aside another word. But this is the point in a script’s development where the genius of redrafting comes into its own and tests the mettle of the writer in question: not only to see if the original idea can stand up to the multiple slice-and-dice, tightening-up of page compression but also to allow the writer to acknowledge the difference between their very best stuff and the rest of the shit they’ve filled it up with.
With this in mind then, I must now progress onwards into my second, third and maybe even my fourth script drafts, carving away chunks of utter slop in the hope of garnering perhaps just a single line of pure virtuosity. Of course, I’ll be saving all my off cuts in another Word document, just in case I’m successful in selling the idea for a series and there’s a need for me to dip into this ‘abortion bin’ of excess ideas to stretch out my feeble storyline kernel. I know it sounds a lot like crapping in a big box for years on end and then having to trawl through it for a single turd that dropped out of your arse back in 1999: not really an appetising thought, but we’ve all got to reassess our past shit from time to time, regardless... uh oh, here come the flashbacks!
So, with all I’ve written above in mind, here is the opening couple of scenes from this new spec script, which is carefully laid out to hide its real narrative theme but still to give an idea of how pedantic you must be to undertake writing within the conformity of this format. It’s a killer but I will prevail!
FADE IN

A darkened bedroom: suddenly, an alarm from a mobile ‘phone sounds, its beep-beep low at first but slowly getting louder. A woman’s voice is heard; this is AMANDA.


AMANDA
Mark? Are you getting up…?
A groan sounds out: this is MARK BODELL. No movement is heard for a few seconds


AMANDA (CONT’D)
(in a slightly louder voice)
Mark! What’re you doing?
Mark leans over and picks up the ‘phone, illuminating the darkened room and blinding Amanda.


AMANDA (CONT’D)
Jesus! Just hurry up will you?!
MARK
(muffled)
Right...﻿
All is quiet again. A few more seconds pass.


AMANDA (CONT’D)
Jesus, every week’s the same! You wake me
up and then I can’t get back to sleep!
He starts to move out of his side of the bed


AMANDA (CONT’D)
If you want to do the car boots’, that’s fine,
but I don’t and that’s the reason why I threw
you out of my house the other fucking week!
Mark stumbles toward the bedroom door and opens it.
AMANDA (CONT’D)
I’m sick and tired of this shit!
He goes through the bedroom door and closes it: the room is dark once more and in silence. Suddenly, the door swings open and the bedroom is flooded with light as Mark storms around searching for something.


MARK
(lifting stuff from the floor)
Can’t find my socks, have you seen them?
Amanda grabs a pillow and with a yelled grunt, throws it at him.


AMANDA
(screaming)
FUCK OFF AND DON’T COME BACK HERE, YOU PRICK!
MARK
(laughing)
Okay, see you later...
He quickly exits the room.

The sound of an engine struggling to start can be heard, accompanied with dim headlights flashing their sickly yellow. Mark clambers out of the dead car and makes his way to its rear.


MARK
(starting to push the stricken car)
Typical bollocks -
The car edges forward slowly and begins to roll, at which point Mark tries to reach the driver’s door, sliding as he goes. The car moves off-screen as he gives chase.

Mark is stopped in mid-movement, his mouth agape.


MARK (V.O.)
Each week, I’m up and out while you’re all still nursing early
morning risers or copping a sleepy feel of your other half’s bits...
(And that is enough of that, as they say)﻿
Posted by Splosher