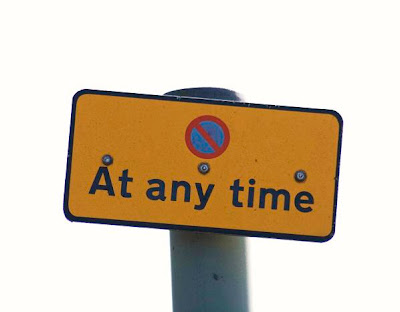 During a trip to my local Post Office the other day, as I queued laden with parcels in a never-decreasing line of coughing, sniffling and diseased people, I happened to overhear just in front of me two blokes speaking in hushed tones. The bloke speaking the most was in his fifties but was powerfully built and had sore-looking cuts and scrapes across his face and bald head; the other bloke was in his thirties and was listening intently, albeit with an increasingly astonished look adorning his face as the older bloke’s tale progressed. With a long wait ahead of me, I popped out one of my MP3 earplugs and covertly eavesdropped on their conversation in order to kill the boredom.
Younger Bloke: (waving his hand up and down) I was going to say you look like you’ve lost weight -
Older Bloke: (cutting in) Thanks for that, I know I look well for my age and there’s not many look this well in their mid-fifties, is there?!
Younger Bloke: (shaking his head) No, no... I mean, I can’t think of anyone else -
Older Bloke: (cutting in again) Gruel and rhubarb...
Younger Bloke: (pause) “Gruel and rhubarb”?!
Older Bloke: Yeah, a gruel and rhubarb regime - you know, oats and rhubarb - that’s what’s shifted my weight to start with -
Younger Bloke: (sounding a little confused) Oh, right, oats...
Older Bloke: And then it’s just a case of bench pressing three hundred pound and doing a thousand push-ups and sit-ups a day to keep in shape -
Younger Bloke: (flabbergasted) ‘kin hell, a thousand push-ups a day?!
Older Bloke: And a thousand sit-ups as well!
The older bloke turns to face the younger bloke and pulls his shoulders back so his trapezius muscles at the side of his neck stick up: he now appears to have expanded in size much like The Incredible Hulk.
Older Bloke: This type of abuse means my traps’ are always up, yeah? Hardest muscles to define, they are - how do they look?
Younger Bloke: (amazed) Jesus! Big, yeah -
Older Bloke: (cutting in) How big are they?
Younger Bloke: (shaking his head) f**king big, yeah!
The older bloke nods his approval, then turns back into the queue.
Older Bloke: I mean, it’s lucky I’m as obsessional as I am with the keeping fit or else I would have come a cropper when this happened the other night -
At this, the older bloke pointed to the many scrapes and cuts upon his head and face.
Younger Bloke: (staring at the lacerations) I was meaning to ask what had happened -
Older Bloke: (cutting in but lowering his voice) I was just coming back from picking up a few things at Asda, when I walked around a corner and bumped into these three little pricks blocking my way.
Younger Bloke: Right. How old were they?
Older Bloke: (thinking) Oh, two of them late twenties, the other just a teenager. Now it was an accident because I had my head down due to it raining, so I caught the teenager with my shoulder as i passed...
Younger Bloke: Complete accident, yeah?
Older Bloke: Right, but because I don’t know my own strength, I knocked this kid sideways liked I’d swatted a fly! It took a couple more strides of me power marching to realise what had happened and that’s when I heard it...
Younger Bloke: Heard what?
Older Bloke: One of the older ones was shouting at me, so I turned around and said “YOU WHAT, YOU C*NT?!”

Other people in the Post Office turn and look at the Older Bloke due to his over-exuberant vocal.

Older Bloke: (quieter) I might have gone overboard a bit saying it like that though...
Younger Bloke: (apprehensively) Right. I’m guessing it didn’t go down too well, yeah?!
Older Bloke: Yeah, you’re right! The next thing I see is this gobby prick coming towards me and he pulls out a f**king knife!
Younger Bloke: (shaking his head) Jesus!
Older Bloke: (smiling) As I had my shopping in my right hand, I just raised my left up and jabbed him, instinctively like and luckily I connected right on his chin and BANG! Down he went, spark clean out!
Younger Bloke: Christ!
Older Bloke: (starting to become more animated) So as I’m looking at this sack of shit slumped on the floor, I suddenly feel something smash into my bastard head and I see stars -
Younger Bloke: (more incredulously) Holy shit!
Older Bloke: Now, any normal person would have gone down with that but I’m not f**king normal, as you know! So I dropped my shopping onto the floor and spun around to see the other older one’s about to swing a bike chain at me yet again! I mean, a f**king bike chain in this day and age!
Younger Bloke: It’s... unbelievable...
Older Bloke: (acting out the actions) Anyway, I just put my arm up in time and the chain wrapped around my padded sleeve, so I just yanked this clown into me and BANG! I nappered him twice with the head and down he went as well! Then, it was just a case of sticking the boot in a couple of times to make sure he was spark clean out, but as I do this I’m cracked over the head yet again!
Younger Bloke: F**k me...
Other people in the queue are beginning to overhear this tale now as the older bloke becomes louder once again.
Older Bloke: (laughing as he tells the story) As I turn around, the teenager I bumped into has done me with something and started running away with his mobile up to his ear, probably calling for more bastards to come and back him up. He’s a good distance away though and I’m in no mood to start running after him, so I pick up a tin of rhubarb from my shopping bag and launch it at him and BANG! Best throw I’ve ever done, right to the back of his head and down he goes! All three f**king pricks sparked clean out by a man more than double their age, triple his age in the case of the youngest little shit!
The younger bloke is speechless. Some of the people in the queue are staring, mouths agape.
Older Bloke: (resuming his normal stance in the line and speaking quieter) So, that was that. I picked up my shopping bag and set off home, covered in blood and with a buzzing in my head. When I finally got in, I could only have the gruel for tea because I’d obviously used the rhubarb up, but I tell you what, I was relieved about one thing...
Younger Bloke: (finally composed) What’s that then?
Older Bloke: I’m just glad I’d bought the tinned rhubarb instead of the loose...
The Post Office queue began to move forward and I plugged my MP3 earplugs back in, still biting my lip and with a growing taste of blood in my mouth as I tried to quell my burgeoning laughter attack at overhearing this snippet of blasé ultra-violence.
Posted by Splosher