Tick-Tock Tattoo and a case for wearing glasses 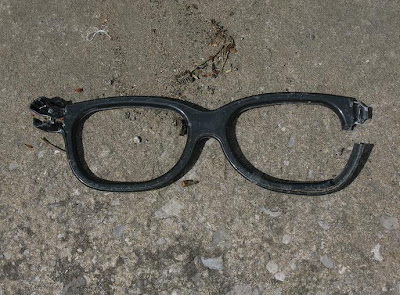 Every two weeks on the Friday, I’ve got the unenviable task of signing-on at my local Job Centre. It’s a place governed by streams of Liberalised red tape and populated with unemployed cretins and employed denizens who have an inability to crack a smile: if you attempt to lighten the mood with a little banter, they’ll glower at you as if you’ve just spat out a hate-filled Bernard Manning joke, regardless of whether you’re just someone trying to earn their next Job Seekers giro or you’re actually an out-of work comedian trying to get a laugh.

Now, living in the land of the Dole denotes having no money in your pockets, ever and the longer you’re in this perpetual circle of handout Hell means that the one- and two-pennies you easily discarded when flush become a heavier and heavier burden to carry (quite literally when cashing in at the local automated Coin Stop machine). Copper-counting becomes a daily business to achieve a pint of milk or a packet of chewing gum when things are desperate, but once you’ve surpassed the point when pennies are actually being accumulated, the land of black tea and chewed finger nails are the inevitable outcomes. This means poverty begets poverty and so, a vicious cycle begins which can only be broken by a new job landing at your feet (unlikely) or breaking the benefits rule and doing some ‘cash in hand’ work to shore your financial drain (much more likely). If neither of these eventualities occurs, then you’re in for the long-haul, dwelling in a place within society where months turn to years and people become institutionally unemployed, unable to face work even if they wanted to.

Thankfully, I’m nowhere near that point as of yet, but I have spent all my spare coppers, so am relying upon the “kind-hearted, fortnightly deposit from my wonderful local benefits office,” (inverted commas and deferential irony going hand-in-hand there)! Anyway, no money means no transport of any kind, so plenty of leg exercise is guaranteed on a daily basis: with my nearest Job Centre being nearly three miles away, it means I’m looking at a round slog of almost six miles each time I have to sign-on, regardless of whether the wind’s trying to blow me over or the heavens are sloshing their piss upon me.

Luckily for me, my last joyful benefits appointment was undertaken beneath a panoramic canopy of azure-sea blue flowing off into the horizon; a place where high above, misshapen tatters of fluffed clouds jostled in battle and the brilliance of Phoebus’ heated blaze fought to steal my very breath before I had chance to breathe (what a waste, eh?!). I’d set off with a thirty minute window to make my signing-on destiny and under normal circumstances, this is a sufficient length of time to oil the joints, stretch the legs and expand the lungs with minutes to spare. However, it soon became apparent - possibly due the sapping heat haze or maybe because I’d nearly been knocked down blindly crossing a side street as I messed with my MP3 player - that I was lagging behind my normal fortnightly pace, so went to check my watch.

I quickly realised, with the little tick-tocking shit not being on my wrist, that I’d left my timepiece at home. ‘Never mind,’ I thought ‘my mobile will do the trick,’ but yet again, an empty space alerted me to the fact that I’d also forgotten to bring my phone as well. Now I was bereft of any form of timekeeping, my subconscious took over the use of my legs and proceeded to set a pace an SAS recruit would be happy with if pounding the Brecon Beacons on their “Long Drag” selection course. Glancing up with a squint through my melting sunglasses’ lenses and into the glare of the baking-hot sunshine, I temporary blinded myself due to believing I could possibly decipher the time of the day from the fiery orb’s position in the sky. It was a big mistake and I spent the next couple of hundred yards rubbing my eyes in the hope of relieving my sight, only to make things worse by wiping some of my pouring brow sweat onto my poor, fried balls. (Oh-er!)

Eventually, I managed to garner some semblance of vision back and during my march onwards, I must have appeared to anyone driving past as a drunken, stumbling bum who was yelling obscenities skyward; although to be fair to the area I was walking through, my actions didn’t raise a single surprised eyebrow, as the strewn empty cans and bottles lying in the shadows testified. Suddenly, just up ahead on my stretch of pavement, I spotted a rather rotund, middle-aged woman sauntering towards me: her arms were draped with a multitude of shopping bags that ran along her forearms like plastic bangles, she wore a black leather mini-skirt with matching stockings and bra, which showed through her sheer blouse and her short, once-peroxide hair now fought along half its length with her reclaimed dark roots.

Another rub to my lathered eyes brought enough respite to enable me to spot this passing vision of menopausal embattlement was actually wearing a wristwatch on her person: after a quick, nanosecond reckoning, I figured my travel time must now be down to single figure minutes before my nib should be scrawling my moniker in the centre of Joblessness.

Without either of us breaking our gaits, I shouted out. ‘Excuse me, Love - have you got the time please?’ was followed with me pointing at her watch in the multi-coloured plastic arm bands with a smile and a nod.

She clocked me, squinted and said, ‘Oh... er, the time? Just a minute... let me get my mobile...’ At this, the woman stopped and then began to lower all her carrier bags to the floor, sliding the handles off from her wrist. I slowed considerably in my walk until I was virtually at a standstill, then began to raise my hand to point at her rather large watch face yet again. ‘Now, I’m sure my phone’s in here, somewhere...’ she said as she began to rummage in a pink patent leather handbag, topped with chrome clasp.

Confused, I was just about to blurt out, “Hang on, what about your watch?!” when I spotted the error of my ways: peering intently at the woman’s "timepiece", I realised that due to my sunbeam-zapped eyeballs that she wasn’t actually wearing a watch after all, but had a large tattoo of a Daisy inked onto the upper-side of her wrist. I lowered my hand quickly.

‘Oh, right...’ was uttered with a barely-audible sound from my parched mouth. I was now wasting valuable time with a near-octogenarian street walker with a fetish for flowered skin adornments and over-shopping, so knew I had to get a move on, rapido. ‘Never mind, Love - roughly, what time is it?’ I said as I was already off moving again, just my head turned back to capture her last words to me.

She looked up and had to crane behind to answer. ‘Er, it’s about five to ten, I think,’ left her mouth, but I was already eyes-front and power marching away into the distance.

I called out, ‘Cheers!’ and then began to jog, safe in the knowledge that I had just a couple of minutes to cover nearly half a mile of town centre and a multitude of roads between me and the Job Centre. This jog rapidly turned into a run, which lasted all of around 20 seconds before reverting back to a jog and then almost immediately, my movements become a stitch-creased, blasphermy-filled panting toddle for the rest of the distance I had to cover.

Making it with just a couple of seconds to spare, I stumbled into the Job Centre, flashed my appointment card and was ushered up to the first floor for my protracted signing-on session. With no time to waste, I was over to my “personal advisor” (no irony whatsoever in this job title) where I flopped down at her table like a Marionette with cut strings and began stewing in my own juices due to the building’s thermostat being set to nuclear. Then, I had to endure the next 20 minutes or so seeping my bodily fluids all over the place, polluting the conditioned air with my fetid workout stench, whilst I deliriously floundered in the chair, red-faced and breathless before a confused young woman who had the power to stop my monies if any part of my pathetic existence offended her.

And what’s the moral of this story? Well, always make sure you give yourself enough time to reach a destination, ensure that you always know what the correct time is and finally, just make certain your eyes are good enough so that you can tell the difference between inanimate objects such as wristwatches and flowery f**king tattoos!
Posted by Splosher